With Tom O'Brien being informed that he will not return as head coach at North Carolina State in 2013, the Wolfpack have started the search for his replacement.

So who could be in the mix to land in Raleigh?

Let's take a look at some possible candidates for athletic director Debbie Yow, who said Sunday in her press conference that Vanderbilt head coach James Franklin is not a candidate for the job. 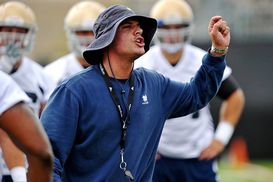 US PRESSWIRENotre Dame DC Bob Diaco could be a prime candidate to land at N.C. State.

Bob Diaco, Notre Dame defensive coordinator: The revival of the Fighting Irish defense during Brian Kelly's tenure has put defensive coordinator Bob Diaco into position as one of the hottest coordinators on the market, and N.C. State is a legitimate candidate to make a run at him. In his third season in South Bend, Diaco has helped ND become the nation's No. 2 scoring defense. Yow is looking for the Wolfpack to get better recruits, and Diaco has done his part in landing ND's best defenders since the Lou Holtz era. He's had help from Kelly and other assistants, but Diaco is one of the reasons why ND will have a Top 5 or 10 recruiting class in 2013.

Chad Morris, Clemson offensive coordinator/QBs coach: Wolfpack fans certainly have seen Clemson's high-octane offense dominate the ACC, and Morris has been the architect. He has helped Clemson to 21 wins over the last two seasons with the team running a hurry-up spread offense. The Tigers put up 62 points in a win over N.C. State this year, so Yow certainly had to be impressed.

Sonny Dykes, Louisiana Tech head coach: Dykes could have his pick of big gigs after leading the Bulldogs to a standout season, which has included wins over Illinois and Virginia this fall as well as a thrilling loss to Texas A&M. His high-powered spread offense is among the nation's best and would bring instant excitement to Raleigh. He is also a good recruiter, is just 43 years old and has a lot of experience.

Butch Jones, Cincinnati head coach: There is a lot of buzz that Jones could be headed to Kentucky, but those talks may have broken down. Jones would be an excellent fit in Raleigh if he decides to bolt Cincinnati, where he has arguably done his best coaching job this fall. The Bearcats can have back-to-back 10-win seasons if they win next week at UConn despite losing quarterback Zach Collaros and running back Isaiah Pead coming into this year. He's a hot name, and N.C. State would be smart to reach out to him.

Willie Taggart, Western Kentucky head coach: The Hilltoppers head coach was an assistant at Stanford and worked with Jim Harbaugh and David Shaw, and he has turned around WKU in a short amount of time, taking the program from 2-10 to back-to-back 7-5 seasons. He has done a lot with so little at WKU, and he has the program bowl-eligible for the first time in school history. His Stanford-style power run game, while not sexy, is productive.

Also keep an eye on: Kent State head coach Darrell Hazell, who has the Golden Flashes at No. 17 in the BCS rankings in his second year with the school.