Possible replacements for Petrino at Arkansas

The timing of the dismissal is awful for everyone involved, including potential head-coaching candidates who athletic director Jeff Long would likely have had on his list if Petrino was fired shortly after the regular season.

I sense that Long may keep Taver Johnson as the interim head coach for the 2012 season, but that's just a feeling. Long said in his presser last night that a national search will commence but that he would evaluate the situation with Johnson after spring drills.

Here are some potential candidates for the job if Long decides NOT to stay interim and look toward the longterm future immediately.

• Gus Malzahn: The Arkansas State head coach is the obvious name that many fans want to be at the top of Long's list. Malzahn is a native son and was a successful prep head coach at three stops in the state. He served as the Razorbacks offensive coordinator in 2006 but left after one season because of differences with then-head coach Houston Nutt. He moved onto Tulsa, where he displayed his offensive wizardry, before running the offense at Auburn and helping the team win the national championship with Cam Newton. Would he want to return to Fayetteville? And is he ready to step onto a BCS stage and be a first-time head coach? Perhaps most importantly, though, is the timing just not right after recently accepting the head job at Arkansas State? It doesn't seem like the Razorbacks would be able to lure Malzahn, but he's the first phone call that Long should make. He'd be a better fit, however, after this season because his offense is different from what the Hogs currently run. 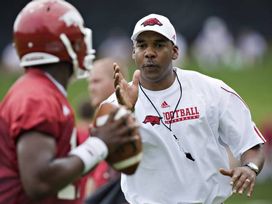 Garrick McGee would make a smooth transition to head coach at Arkansas if Hogs AD Jeff Long made the move.

• Garrick McGee: The former Razorbacks quarterbacks coach and offensive coordinator may be the recipient of an early phone call from Long because of his familiarity with the Razorback players, coaches and schemes. The problem is he was just named the head coach in December at UAB, where he will be the face of a program for the first time in his career. So the timing for this opening is terrible. But would McGee really pass up the opportunity to continue to work with quarterback Tyler Wilson, running back Knile Davis and this still-explosive offense? His recruiting prowess has been noted and he obviously has SEC experience. If he wasn't recently hired at a new job, he would arguably be the odds-on favorite.

• Butch Davis: The former North Carolina head coach was dismissed from Chapel Hill in light of the NCAA's two-tiered investigation into the football program. However, the Tar Heels did a great job of painting associate head coach John Blake as the bad seed, so Davis was not mentioned in the NCAA's notice of allegations. Prominent Arkansas booster Jerry Jones, the owner of the Dallas Cowboys, could have a big influence as to who the Hogs hire, and Jones is fond of Davis, a former Cowboys assistant and a member of the Arkansas Class of 1973. Davis was a defensive end with the Hogs before an injury relegated him to student assistant. But could Long really fire Petrino to hire Davis, knowing that Davis was running a program that came under NCAA fire?

• Charlie Strong: The Louisville head coach nearly took his program to a BCS bowl game last year by netting the conference's automatic bid. The Batesville, Ark., native played at Central Arkansas and has SEC coaching experience from his time at Ole Miss, Florida and South Carolina. While he has only been the head coach of the Cardinals for two seasons, he has rejuvenated that program and would excite the Hogs fan base -- once they get over the fact that Petrino is gone, which may take a little while.

• Gary Patterson: The TCU head coach's name will always come up when major programs have openings because he's one of the best in his profession. But the Horned Frogs are now in the Big 12, so that solves the dilemma of not being able to coach at a BCS/AQ-status school. Even with the AQ status possibly being eliminated once the new postseason format is decided, Patterson would have to be very much wooed to leave Fort Worth. And Arkansas doesn't seem to have the goods for him to make that jump.

• Paul Rhoads: The Iowa State head coach has revived the spirit of Cyclone fans in Ames after taking the team to two bowl games in the last three seasons. We know how difficult it is to win at Iowa State, but Rhoads has made this squad competitive even against the better teams in the Big 12. The former defensive coordinator was behind the game plan at Pittsburgh that thwarted quarterback Pat White and West Virginia's dreams of a BCS title game appearance in 2007 and he also ran the defense at Auburn, so he has SEC experience. His brand of football may not be flashy, but it's effective. Oh, and he also worked at Pitt while Long was the athletic director there.

• Mario Cristobal: The head coach at Florida International flirted with Pittsburgh and Rutgers earlier this offseason and is ready to move onto a bigger program after helping FIU rise from the ashes after NCAA sanctions crippled the program. He's tireless and energetic, and his overall record with the Golden Panthers should be overlooked because of just how bad the program was when he took over. The team has won 15 games over the last two years and made back-to-back postseason appearances. The Miami native has had most of his success in Florida, though, with the exception of an assistant stint at Rutgers.