With Tommy Tuberville bolting Texas Tech for the Cincinnati head job, the Red Raiders have started the search for his replacement.

So who could be in the mix to land in Lubbock?

Let's take a look at some possible candidates for the Red Raiders.

Chad Morris, Clemson offensive coordinator: The Clemson OC won three high school state championships as a prep coach in Texas, and his name has been linked to other openings this offseason. He took over Clemson's offense in 2011, and the Tigers averaged 33.6 points and 440.8 yards per game last season. This year, the Tigers averaged 42.3 points and 518.3 yards per contest. Morris recently interviewed at Auburn, so he certainly is highly regarded. 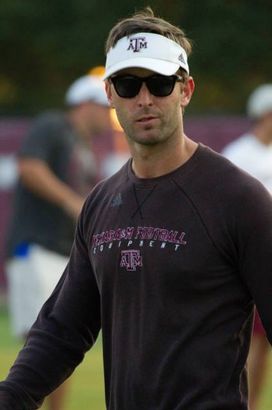 Texas A&M OC Kliff Kingsbury is a hot commodity in the coaching ranks.

Kliff Kingsbury, Texas A&M offensive coordinator: The former Texas Tech quarterback is considered a rising star in the assistant ranks, and it doesn't hurt that he is the OC of an offense that produced this year's Heisman Trophy winner. The Red Raiders remain a pass-happy team, and Kingsbury was the play-caller for a similar attack at Houston with Case Keenum in 2011. He is just 33 years old, but many inside of the college football world believe that he is ready to be the face of a program. This fall the Aggies led the SEC in scoring and total offense, averaging 44.8 points and 552.3 yards per game,

Phillip Montgomery, Baylor offensive coordinator/quarterbacks coach: Montgomery has been around the spread offense for five seasons under Art Briles at Baylor, and he was helpful in the development of Robert Griffin III and Nick Florence. Montgomery's name seems to always go under the radar, but his familiarity with the Big 12 could be intriguing for Red Raider officials.

Ruffin McNeil, East Carolina head coach: The former Red Raiders assistant has done very well as the head coach at East Carolina. Before getting his shot with the Pirates, McNeill served as Texas Tech interim head coach following the suspension and firing of Mike Leach. McNeil previously had served as the assistant head coach, special teams coordinator and linebackers coach at Tech. He may not want to return to a school that bypassed him for Tommy Tuberville, but he certainly is qualified. He is 19-18 at East Carolina and his team will play in the New Orleans Bowl this year.