Let's take a look at the National Football Post's post-spring list of potential Heisman Trophy contenders for 2014. The winner will be announced in New York on Saturday, December 13.

Jameis Winston, QB, Florida State: I believe that it will be terribly difficult for any player to ever repeat as the Heisman Trophy winner. We live in a different time now, where increased media spotlight lends itself to increased scrutiny. However, Winston leads this list because he should only get better as a quarterback, and he still has top weapons on offense such as Rashad Greene, Nick O'Leary and Karlos Williams along with four starters from a strong offensive line. If he remains out of trouble off of the field, Winston certainly should be in the mix and have a chance to at least get an invite back to New York with a strong campaign in 2014. But not even Tim Tebow or Johnny Manziel could repeat, so it will be quite a challenge. 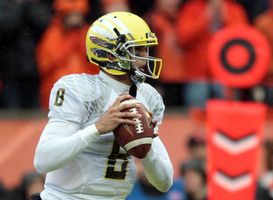 Marcus Mariota, QB, Oregon: If the Ducks are able to solve their "Stanford problem," Mariota may have the numbers at the end of the year to be considered the favorite for the hardware. If not, he will likely fall out of favor among Heisman voters. Last November was a month to forget for Mariota, as he battled a knee injury while the Ducks limped toward the end of the regular season. But keep in mind that he was the Heisman frontrunner heading into the Thursday night showdown with Stanford because he had put up spectacular numbers as an exceptional talent. A trip to New York could be on the horizon if the Ducks find a way to get past the Cardinal in 2014, because a healthy Mariota will likely have the stats — although receiver Bralon Addison's status is very much uncertain so redshirt freshmen Devon Allen and Darren Carrington may need to step up and become key parts of the passing game.

Nick Marshall, QB, Auburn: After the former Georgia cornerback received some late Heisman love last season en route to helping the Tigers reach Pasadena, Marshall had a very strong spring in which he continued to develop more fully as a passer to go along with his run skills in Gus Malzahn’s no-huddle offense. JUCO transfer D’haquille Williams will help Marshall's cause with his game-breaking ability at wide receiver, so the dual-threat QB could be set up to have a more consistent 2014. His backfield mate Tre Mason earned an invite to New York last year, but Marshall could be ready to take his seat in NYC this year.

Todd Gurley, RB, Georgia: Running backs Andre Williams, Tre Mason and Ka'Deem Carey all had spectacular 2013 seasons. But if Gurley was healthy, he would have proved to be the best running back in the country last fall. He has an elite combination of strength and speed, and he is also a threat as a pass-catcher out of the backfield. Aaron Murray is no longer in Athens to take Heisman buzz away from Gurley, and he could get even more chances to carry the football with Keith Marshall a redshirt possibility.

Braxton Miller, QB, Ohio State: The dual-threat Buckeyes signal-caller returns to Columbus after bypassing the NFL Draft, and he could be considered one of the odds-on favorites to win the award because he likely would have given Winston a serious run last year if he hadn't missed so much time due to injury. Ohio State will be very good this fall, and Miller will have another year of experience leading the prolific Urban Meyer Power Spread offense. The dual-threat could be poised for a big senior season.

Brett Hundley, QB, UCLA: Hundley did himself a favor by coming back for one more year in Westwood, and he will have a chance to increase his production in marquee games for the Bruins. Jim L. Mora's squad could be a College Football Playoff darkhorse this season, and a lot of that will depend on the play of Hundley, who recorded 35 total touchdowns in 2013.

T.J. Yeldon, RB, Alabama: With quarterback AJ McCarron gone, Yeldon and the Crimson Tide's running backs will be spotlighted even more than usual in Tuscaloosa. Yeldon recorded another 1,000-yard season last fall, and he is once again the top dog in the 'Bama backfield despite the depth at the position — including Derrick Henry, who displayed his beastly ways in the Sugar Bowl loss to Oklahoma. Henry certainly could make any preseason Heisman Watch List, but Yeldon remains the better backfield bet at 'Bama.

Myles Jack, LB/RB, UCLA: If there was a Heisman Award for the month of November last season, Jack may have been able to claim it. The two-way player was named the Pac-12 freshman of the year on both defense and offense for his versatility, which included at least one touchdown in four straight games once he started getting carries as well as a contest in which he found the end zone four times. He also happens to be one of the nation's best linebackers. He has a chance to pull off a Charles Woodson in 2014 only if Jim L. Mora finds room for him in the backfield despite the running back corps being much healthier than it was last season. Jack will have a tougher battle for votes because he plays on the West Coast, whereas his teammate Hundley and Oregon's Mariota at least play a glamour position.

Mike Davis, RB, South Carolina: The Gamecocks will have to replace Connor Shaw's production on the ground, which came in the form of 154 carries. So while Davis put up strong numbers in 2013 — 1,183 yards and 11 touchdowns — those stats have a chance to dramatically increase with Dylan Thompson at QB and Shaw moving on.

Bryce Petty, QB, Baylor: Yet another quarterback in a long line of prolific signal-callers under the tutelage of Art Briles, Petty finished seventh in the Heisman voting last year and ended up passing for 4,200 yards and 32 touchdowns against just three interceptions. He is back in Waco and has plenty of weapons around him such as Antwan Goodley, Levi Norwood and Corey Coleman. If the Bears this fall resemble the team that flirted with a chance at the BCS national title game deep into the season, Petty will be in the mix.