Can 2013 winner Jameis Winston, who easily won the award over the weekend, join Griffin in the very distinctive club by taking home the hardware again next year?

Let’s take a look at some of the best-positioned candidates for 2014 including Winston, who makes this way-too-early list because the redshirt freshman will be returning to Tallahassee next season.

Jameis Winston, QB, Florida State: I have my doubts as to whether there will ever be another repeat Heisman Trophy winner. We just live in a different time now, where increased media spotlight lends itself to increased scrutiny. However, Winston will only get better as a quarterback. And that's a scary thought. So Winston certainly should be in the mix and have a chance to at least get an invite back to New York next year with a strong campaign in 2014. But not even Tim Tebow or Manziel could repeat, so it's quite a challenge.

Todd Gurley, RB, Georgia: There is no doubt that players such as Andre Williams, Tre Mason and Ka'Deem Carey had magnificent 2013 seasons. But if he's healthy, Gurley is the best running back in the country. He not only uses his strength and speed to pick up yards on the ground (903 rushing yards and 10 touchdowns in an injury-plagued year), but he is also a threat as a pass-catcher out of the backfield (30 catches and five scores). And Aaron Murray will no longer be in Athens to take Heisman buzz away from him.

Marcus Mariota, QB, Oregon: Until the Ducks are able to solve their Stanford problem, Mariota will fall out of favor quickly among Heisman voters. Granted, Mariota's November was a month to forget. But he was battling a knee injury as the Ducks limped toward the end of the regular season. There was a reason why Mariota was the Heisman frontrunner heading into the Thursday night showdown with Stanford: he is an exceptional talent. And a trip to New York could be on the horizon if the Ducks find a way to get past the Cardinal in 2014, because a healthy Mariota will have the numbers.

Braxton Miller, QB, Ohio State: The dual-threat Buckeyes signal-caller could elect to enter the NFL Draft, but I have a feeling that he will come back to Columbus. If he does return to school, he may be the odds-on favorite to win the award because he would have given Winston a serious run this year if he hadn't missed essentially three games due to injury. Ohio State will be very good again next year, and he will lead the prolific Urban Meyer offense if he comes back for his senior season.

Myles Jack, LB/RB, UCLA: If there was a Heisman Award for the month of November, Jack may have been able to claim it. The two-way player was named the Pac-12 freshman of the year on both defense and offense for his versatility, which included at least one touchdown in four straight games once he started getting carries as well as a contest in which he found the end zone four times. He is also part of one of the nation's best linebacker corps. Could he pull off a Charles Woodson in 2014? Jim L. Mora must find room for him in the backfield even if the running back corps is healthy. Jack, like Mariota, will also have a tougher battle for votes because he plays on the West Coast.

Bryce Petty, QB, Baylor: Yet another quarterback in a long line of prolific signal-callers under the tutelage of Bears head coach Art Briles, Petty finished seventh in the Heisman voting this year after passing for 3,844 yards and 30 touchdowns against just two interceptions. He is coming back to Waco and could have even better numbers with a full year of starting under his belt. If the Bears next year more resemble the team that flirted with a chance at the BCS national title game deep into the season, he will be in the mix.

Nick Marshall, QB, Auburn: The former Georgia cornerback received some late Heisman love, but it was teammate Tre Mason who ultimately earned the invite to New York for the ceremony. But Marshall continued to get better and better each week in Gus Malzahn's offense, and he should have a more consistent 2014 because of that improvement. He has a chance to win a BCS national championship in Pasadena in January. Can he claim the sport's most prestigious individual award next December?

T.J. Yeldon, RB, Alabama: With quarterback AJ McCarron departing, Yeldon and the Crimson Tide's running backs will take centerstage in Tuscaloosa in 2014. He recorded another 1,000-yard season this fall, and he will always be in the spotlight because Alabama will remain a national powerhouse as long as Nick Saban is in town. Even with depth at the position, Yeldon is the top dog in the 'Bama backfield.

Definitely have a chance to be in the race if they return to school, but the NFL may be calling... 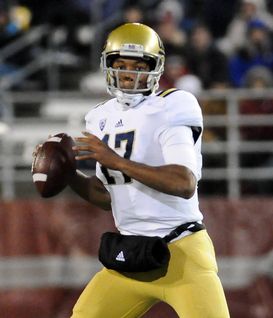 US PRESSWIREWill Brett Hundley return to UCLA in 2014?

Brett Hundley, QB, UCLA: He recorded over 3,400 yards of total offense and 31 touchdowns, and he is only getting better. He could have a huge 2014 if he returns to Westwood.

Teddy Bridgewater, QB, Louisville: I think it's virtually impossible to see him returning to school in 2014, but he certainly would be a top contender if he did so. Will we get to see Bridgewater against ACC competition, including against Notre Dame, when the Cardinals move into their new conference?

Tre Mason, RB, Auburn: He was a finalist this year, but can he top what he did this fall? He may be undersized, but he could take advantage of the momentum he has built and try to strike while the NFL iron is hot.

Bishop Sankey, RB, Washington: I can't see him returning after a phenomenal run in Seattle, although he would do himself a service to play for new Huskies head coach Chris Petersen.