With the advent of a four-team playoff in major college football beginning in 2014, the BCS along with the non-AQ designation will be no more. Until then, though, all eyes will be on the weekly BCS standings as soon as the first set is released in October. And for teams in non-BCS leagues, the goal remains to get into the mix for spots in major bowl games such as the Fiesta Bowl, just as teams such as Boise State and TCU have been able to do in the past. So, today, let's take a look at some non-BCS teams that could be primed to crash the BCS party this fall. 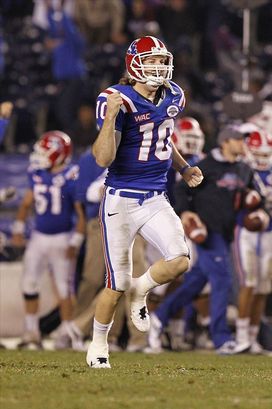 The Bulldogs have a chance to put themselves on the national map when they host Texas A&M, a team making its debut this season in the SEC. Head coach Sonny Dykes has this program on the rise as he enters his third season in Ruston, and this offense is primed to give opposing defenses fits. Receiver Quinton Patton was a huge junior-college pickup last offseason, recording 1,200 yards and 11 touchdowns, and quarterback Colby Cameron will have additional help in the form of Myles White and D.J. Banks. The Bulldogs beat Ole Miss and fell to Mississippi State in overtime last fall before losing by just a touchdown to TCU in their bowl game. In addition to A&M, Louisiana Tech also faces Illinois and Virginia. So there will be a few opportunities to break through against BCS-level competition this fall. With 16 starters returning from last year's squad, this is a dangerous non-AQ program. And the future is bright with former Parade All-American quarterback Scotty Young on his way from Texas Tech. The question is how long will Dykes be in Ruston before a major program offers him a bigger gig?

Sure, the Golden Eagles' success last season helped pave the way for Larry Fedora to cash in and take the head gig at North Carolina. But Southern Miss was able to bring in Ellis Johnson from South Carolina, where he was overseeing an increasingly talented defense in Columbia. Johnson could have stayed in an ideal spot in his home state, but the lure of a head job at an underrated program was too much to pass up. The former Mississippi State DC knows the state of Mississippi and surrounded himself with a competent staff for his first year on the job in in Hattiesburg. This is a program that is used to winning, so Johnson didn't inherit a bare cupboard. The biggest challenge he faces is replacing star dual-threat quarterback Austin Davis, who threw for 3,496 yards and 30 touchdowns in 2011, finishing his career as the school’s all-time leading passer with 10,892 yards. Fellow dual-threat Anthony Alford, however, has arrived after being a U.S. Army All-American. He had offers from such powers as Alabama, LSU and Nebraska. Injuries ravaged their backfield last year, so depth is an issue. And the Golden Eagles have to replace their top two receiving threats in Ryan Balentine and Kelvin Bolden. But Tacy Lampley and Dominique Sullivan could be ready to shoulder the load. Defensively, this team returns just four starters from their dominant group in 2011. But historically this has been a defense that's been capable of shutting down top offenses, and the secondary should be a strength. Even if the season-opening trip to Nebraska doesn't result in a victory, we'll see how legit Southern Miss can be when it hosts Louisville in late September. And an early-October contest against Boise State could serve as a BCS elimination game.

Native son Gus Malzahn took over for Hugh Freeze in Jonesboro after Freeze left to fill the head coaching vacancy at Ole Miss. There's no question that fans are excited about the former Auburn offensive coordinator, but he has never been a head coach at the FBS level. However, he has never been more ready. And he inherits a Red Wolves program whose offense was ranked No. 24 in the country in 2011 en route to a 10-win regular season. Senior quarterback Ryan Aplin is back, but he needs to be better protecting the football after tossing 16 interceptions last fall. However, expect him to run more in Malzahn's spread scheme. He has the talent to do it after rushing for 588 yards and 10 touchdowns in 2011. When he does throw, he'll have 6-4 Taylor Stockemer and 6-3 Josh Jarboe as top targets. The major issue that could thwart the Red Wolves' designs on cracking the BCS party is their schedule. Malzahn will get an unwelcome start to his head-coaching career when he travels to Eugene to play Chip Kelly and Oregon in the season opener. And two weeks later the Red Wolves travel to Lincoln to battle Bo Pelini and Nebraska. Still, this team was competitive against Illinois and Virginia Tech in losses last year. So 10 wins isn't out of the question even if they have to bulk up on Sun Belt wins. 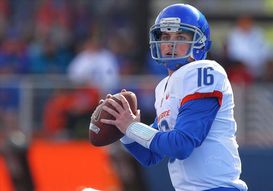 ICONJoe Southwick will take over for Kellen Moore as the starting QB at Boise State.

The Broncos make this list yet again simply because of Chris Petersen. That's how good of a head coach he has been throughout his tenure in Boise. While he continues to improve the talent level throughout his team, the player development and coaching across the entire staff has been top-notch during his tenure. And that will be ever so important after losing so much quality talent, including Kellen Moore, one of the best quarterbacks the college game has ever seen. Moore, along with six other Bronco players selected in this past April's draft, have moved onto the NFL. Joe Southwick now steps into the starting role at QB after having served as a backup for two seasons. As long as he keeps turnovers to a minimum, this offense should be solid. Keep in mind that this is a program that has lost only 6 games since 2007. But the 2012 season starts with a tough test in East Lansing against darkhorse BCS title contender Michigan State. A home game against BYU and a road trip to Southern Miss also loom. However, an opening loss to the Spartans may not be too damaging if the Broncos could run the table the rest of the way. But a lot of talent and depth was lost from an underrated defense.

I wrestled with putting the Cougars on this list, but two things really stood out to me when debating their 2012 outlook: the schedule and David Piland. The Cougars do have to travel to California to play UCLA, but other than that contest the slate isn't too daunting. And Piland was able to step in for Case Keenum when Keenum tore his ACL in 2010, recording 2,641 passing yards and 24 touchdowns. And this past spring he was accurate on his way to nearly 300 passing yards and a pair of touchdowns in the Cougars' spring game. Losing Kevin Sumlin to Texas A&M obviously is a big blow, as Sumlin was a hot commodity on the head-coaching market. But turning to assistant Tony Levine gives the team a semblance of continuity, so the players shouldn't have trouble buying into Levine's message. Charles Sims, who averaged over 7.0 yards per carry last season, returns to a deep backfield. So offensively this is still a dangerous unit.

The Bobcats open the season at Penn State, and the best team in the MAC should give the Nittany Lions a serious challenge — especially with PSU likely to go through growing pains while continuing to learn a new offense. Frank Solich's squad possesses a very good offense, led by dual-threat quarterback Tyler Tettleton. And its defense is strong as well, particula rly up front and in the secondary. Other than having to travel to State College, it's not a very difficult 2012 schedule. Is it possible for Ohio to top even last season, when the program won 10 games for the first time in its history?