The announcement from the first-year Red Raiders boss was made in a statement released by the school on Sunday. 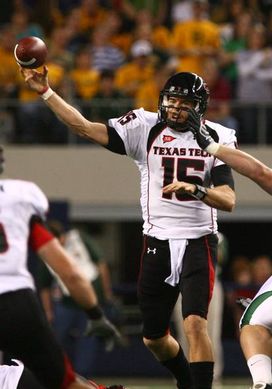 “We have a very talented group of quarterbacks and are excited about every one of them,” Tuberville said in the statement. “The competition during camp between Taylor (Potts) and Steven (Sheffield) has been outstanding but at the end of the day we can only have one starter.

“Taylor has done a tremendous job and we feel like he has gotten better each and every day. There is no doubt that Steven has also improved during camp and will still be fighting to take over that starting job every day at practice. That kind of competition will only make us stronger as the season goes along.”

The school stated that Tuberville would have no further comment until after Monday morning's practice.

In the team’s first scrimmage last week, Potts outplayed Sheffield, giving him the edge going into Saturday’s scrimmage. He clearly didn’t do anything to hurt his chances this weekend.

The Red Raiders open the season Sept. 5 against SMU.