We saw the Purdue offense get decimated by injuries early last season.

Unfortunately, that trend is continuing into fall camp this season. 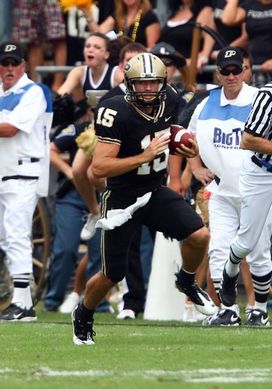 Boilermakers sophomore quarterback Rob Henry suffered a non-contact ACL tear in his right knee at practice Tuesday, according to a release from the school.

Further diagnosis will determine the extent of the injury and how long he will be sidelined.

“Rob Henry is a huge part of our football program, our heart goes out to him” head coach Danny Hope said in a statement. “He was voted a captain by the team in the spring, and I know he will continue to inspire and push Robert (Marve), Caleb (TerBush), Sean (Robinson) and all of his teammates forward.”

While the Boilers have some depth at quarterback, Henry was close to earning the starting job this fall as he was coming off a strong offseason. Further, Marve is still dealing with his own knee issues.

Now, TerBush may find himself as the starter in the season opener against Middle Tennessee State next week despite not seeing action his three seasons in West Lafayette.

It will be interesting to see if Marve's knee improves enough for him to be a factor in 2011. But the loss of Henry is a tough blow, especially because of his improvement since last season and the fact that he emerged as a leader during spring drills and summer workouts.