QB decision looms, but run game is key for Florida

Heading into spring practice, the competition for the starting quarterback job at Florida between Jacoby Brissett and Jeff Driskel was the headline-grabbing storyline for most Gator fans looking forward to putting behind the team's 7-6 debut season under Will Muschamp.

So it was no surprise that all eyes were on the two rising sophomores during Saturday's spring game in Gainesville, which put a bow on the team's early preparations for the 2012 campaign. 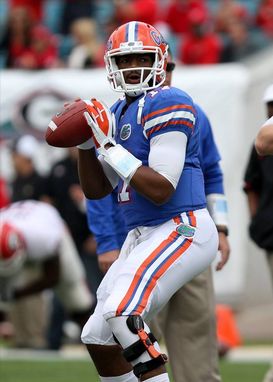 ICONWhen it comes to pocket presence, Jacoby Brissett has an edge over Jeff Driskel.

Both signal-callers became more comfortable in first-year coordinator Brent Pease's offense as the game progressed, with the pair leading their respective teams down the field consistently in the second half of the contest. While neither quarterback separated himself as the established starter heading into the summer, Muschamp and the offensive staff didn't expect a leader to emerge. Rather, this spring was more about developing rapport with the surrounding playmakers, further immersing themselves in the playbook and getting as many reps as possible as the leaders of the offense.

Overall, both Class of 2011 quarterbacks played well enough to carry some momentum into the offseason.

Brissett, who is a more refined passer with a stronger arm and ability to chuck the football down the field, looked a bit more comfortable in the pocket during the spring showcase. He finished 9 of 16 passing for 233 yards and two touchdowns.

"I love throwing the ball deep," Brissett told reporters after the game. "I love getting the drive over in one play, two plays, so we don't have to stay on the field that long."

Driskel, meanwhile, is a more accomplished scrambler who was recruited by former head coach Urban Meyer to run the spread option. It's no coincidence, then, that he was better on the run Saturday, especially on designed rollouts. He went 12 of 14 through the air for 147 yards, including a 44-yard pass to Andre Debose, with a rushing touchdown.

"Just knowing the playbook gives you confidence," Driskel said. "Last year, I was kind of a little clueless out there just kind of locking onto one guy. I feel like I'm going through my progressions more and just playing instead of thinking."

Coming into the spring, I thought Driskel could have had the advantage in this race despite being passed by Brissett on the depth chart last year because offensive line was a problem area for the Gators last season. And with a shaky O-Line, a quarterback on the run would be crucial to keeping the Gators out of too many negative plays.

However, Muschamp praised the offensive line after Saturday's contest, as it was clear that the unit made great progress thus far in the offseason. Because of this improvement, Brissett's talents could be the better fit for Pease's pro-style offense.

Still, as crucial as the quarterback play is in Gainesville this fall, the rushing attack remains of central importance. Without a strong ground game, it won't matter who is taking the snaps. With an offensive line committed to toughness and a physical brand of football, the Gators could be ready to make the downhill run game a strength once again with Chris Rainey and Jeff Demps departed. 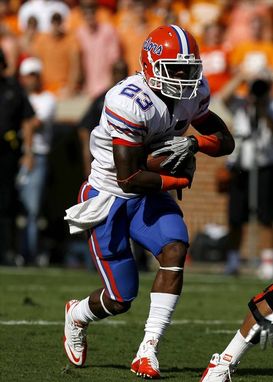 ICONMike Gillislee will get his chance to become the lead RB in the Gators backfield.

Mike Gillislee is the projected starter at tailback, and he finished with 35 yards on 6 carries in the spring showcase. Gillislee has distanced himself from the running back pack, according to Muschamp, so for the first time in his Gators career he will own the spotlight. But UF received some surprise performances this past weekend from Gillislee's backfield mates, and that could go a long way towards keeping the backs fresh throughout the rigorous SEC campaign. Depth is also key if Gillislee gets felled by the injury bug again, as he has struggled to stay healthy the past three seasons.

Mack Brown and Omarius Hines saw their reps increase this spring, and Brown rushed for 31 yards and a five-yard scoring dash on 8 carries Saturday. Hines had just 13 yards on 4 carries in the contest, but he had a nice day with five catches and could be a bigger third-down back in the downhill attack. The biggest surprise, however, was former linebacker Chris Johnson, who rushed for 50 yards and a touchdown on 13 carries. With Muschamp proclaiming after the Blue-Orange game that the team is "better up front," look for the Gators to attack the middle of the defense and avoid the east-west plays that they had to run with Rainey and Demps. Muschamp also expected freshman Matt Jones to compete for reps when he arrives in the summer.

Muschamp's vision of a stronger, more physical team begins and ends with a sound, downhill rushing attack. With new strength and conditioning coordinator Jeff Dillman and first-year offensive line coach Tim Davis in the fold, Muschamp can at least enter the summer months knowing that the groundwork has been laid for an improved offense under Pease, who arrived from Boise State after previously working in the SEC at Kentucky.

“It’s tremendously different,” Muschamp said of the improved outlook on the ground. “We’re able to run with a bigger, physical back that can take more hits. There’s no question it’s going to help us.”

As important as the competition is between Brissett and Driskell, whoever wins the job must have a complementary rushing attack to help lighten the offensive load. And based on the work in spring drills, the Gators have to be happy where they stand as we look toward the summer and fall months ahead.