The 2014-15 college football postseason continues on Friday with the Quick Lane Bowl between North Carolina and Rutgers at Ford Field.

Let's take a closer look at the matchup between the Tar Heels and the Scarlet Knights.

The Tar Heels can move the football effectively and consistently down the field, as dual-threat quarterback Marquise Williams has averaged over 320 yards per game over his last nine contests since being held in check by East Carolina back in September. However, he was very much contained and ultimately knocked out of the team's loss to North Carolina State to end the regular season. That bad loss was a bit of a head-scratcher in a season filled with disappointing losses. UNC had very good wins over Georgia Tech and Duke, but it also had bad losses to ECU and NC State. Larry Fedora's squad had a 39-17 victory over Cincinnati in the Belk Bowl last season, so we'll see if it can play a similarly strong game in this postseason contest. Rutgers defensive linemen Darius Hamilton and David Milewski are capable of providing a strong pass rush, though, so Williams may have to frequently be on the move while trying to find receivers Ryan Switzer, Quinshad Davis and his other surrounding playmakers. 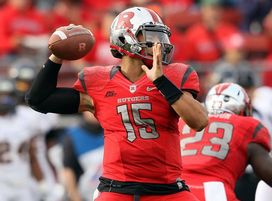 Taking care of the football is always the major issue for Gary Nova.

The Scarlet Knights should have plenty of chances to expose a weak UNC secondary. Wide receiver Leonte Carroo is averaging almost 20 yards per catch, and the Tar Heels have allowed 8.8 yards per pass attempt this season. Carroo has racked up 1,043 receiving yards and is the go-to option for quarterback Gary Nova, who still has consistency issues but should have plenty of chances to pick up big chunks of yardage against a UNC defense that has allowed 47 points or more in four of its defeats. But taking care of the football is the primary concern for Nova, who has tossed 10 of his 12 interceptions in his team's losses. And in four of the Scarlet Knights' losses, they were held to 17 points or fewer. But keep in mind that UNC associate head coach for defense Vic Koenning is no longer with the program, so assistant Dan Disch will run the defense in this game. And don't dismiss the Rutgers ground game. Despite losing star running back Paul James to a knee injury, a back-by-committee held its own down the stretch, and UNC allowed over 230 rushing yards per game this fall.

Other notes: This bowl replaces the Little Caesars Pizza Bowl, only this version features the ACC vs. Big Ten rather than the MAC vs. Big Ten ... North Carolina is favored by 3 points ... These teams have met six times before, with each team winning three times ... Rutgers is trying to reach eight wins for the seventh time in nine seasons, while UNC is trying to net its seventh straight winning season with a victory.