Reloaded Alabama remains at the top of its game

There is no rebuild at Alabama. Not under Nick Saban.

The veteran Crimson Tide head coach proved once again that he is running a professional football factory in Tuscaloosa, leading his team to a dominant victory over fellow Top 10 squad Michigan on Saturday night in Arlington, Texas, at Cowboys Stadium.

Despite losing defensive stars Mark Barron, Dre Kirkpatrick, Dont'a Hightower, Courtney Upshaw, DeQuan Menzie and Josh Chapman to the NFL, Saban simply fielded talented players in Week 1 who have bought into the Saban way. And for Crimson Tide fans, the result couldn't have been any more reassuring. 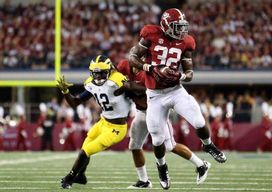 C.J. Mosley returns an interception for a TD to give Alabama a 31-0 lead over Michigan.

In the absence of those NFL rookies, linebackers Trey DePriest, C.J. Mosley, Nico Johnson as well as cornerback Dee Milliner stepped up and started to assert themselves as the new stars of what will once again be a dominant defense. While it's just one game in a long season, the Tide completely shut down Denard Robinson and the Michigan offense in a 41-14 victory. And Saban showed that there may not be dropoff after all like there was in 2010, the year after the Tide beat Texas for the BCS title but lost several key starters.

On the offensive side of the ball, Trent Richardson wasn't even missed.

Let that sink in for a moment. Richardson, a Heisman Trophy finalist, wasn't even missed.

After a three-and-out on its first possession, Alabama scored three straight touchdowns in the first quarter en route to a thorough victory. Running backs Eddie Lacy and Jalston Fowler showed that they have been around Tuscaloosa long enough to know that they will be cogs in a well-oiled machine. But it was true freshman T.J. Yeldon who looked like a true difference-maker, rushing for over 100 yards in his first contest and showing the breakaway speed that made him one of the top rushers in the Class of 2012.

We'll find out more about the Tide in two weeks when they travel to Arkansas to face the high-octane passing attack of the Razorbacks led by Tyler Wilson. Maybe the secondary will be exposed and linebackers will be out of position. Maybe Yeldon struggles to adapt to defensive coordinators zoning in on him.

But for one night at Cowboys Stadium, the Tide showed that they have never been more focused on repeating as BCS national champions.

No rebuild necessary at Alabama.