The availability of Arizona star wide receiver Juron Criner for the 2011 season was first put into question by the Arizona Daily Star's Greg Hansen, who wrote in his Sunday column this past week that the 2010 All-Pac-10 receiver might not be available for training camp in August. Hansen described Criner's status for the season as uncertain because of undisclosed medical reasons. 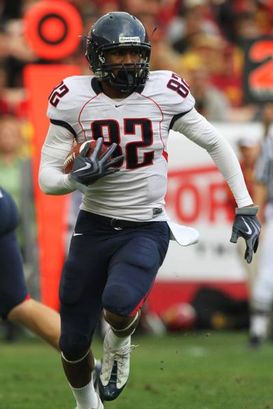 However, this surprising news didn't really emerge until earlier Wednesday when the online edition of the story became available to readers nationwide.

But an ESPN.com report late Wednesday, citing a source close to the Arizona program, states that Criner could miss the upcoming season due to an undisclosed personal issue.

Arizona's sports information office was unable to provide comment on the issue due to student privacy guidelines. Head coach Mike Stoops is currently out of town.

The second-team All-American Criner led the Wildcats with 82 receptions for 1,233 yards and 11 touchdowns last season and is projected to be one of the first receivers taken in the 2012 NFL Draft.