Report: Brown to step down at Texas

The Mack Brown era at Texas is reportedly coming to an end. 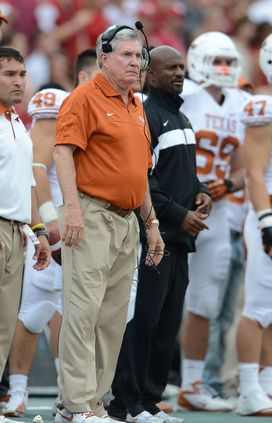 US PRESSWIREMack Brown will leave Texas second in wins only to legendary head coach Darrell Royal.

According to Chip Brown of Orangebloods.com, the longtime head coach of the Longhorns will step down from his position after 16 seasons.

Rumors have been swirling about Brown's future ever since the Longhorns stumbled out of the gate at 1-2 with embarassing losses to BYU and Ole Miss to begin this season, but his future was especially unclear heading into school president Bill Powers’ meeting with the Board of Regents on Thursday.

Powers has been battling some Board members who have wanted Brown to walk away. Speculation swirled that the meeting with Powers could have ended with him being asked not to stand in the way of Brown's removal because the two are close. Perhaps the Board wanted to put pressure on Powers to get Brown to “resign” or “retire.” It is unclear whether this meeting would ultimately lead to the dismissal of Powers as well.

What is certain is that the ‘Horns have a huge junior recruiting weekend coming up, so it will be interesting to see how those attending players react to Brown's reported departure.

Brown and new Longhorns athletic director Steve Patterson reportedly talked at length Sunday in Austin and left for New York together for National Football Foundation functions. It is unclear what was discussed at their meeting in Texas.