Wade Phillips wasn’t the only head coach to lose his job on Monday. And this one doesn’t come as much of a surprise either.

According to a report from CBS4 Sports in Denver, Colorado has fired Dan Hawkins after five rough seasons in Boulder. It is unlikely that Hawkins will finish the rest of the schedule. 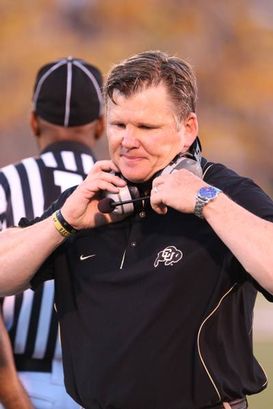 ICONDan Hawkins is out at Colorado, according to a report.

Vic Lombardi of CBS4 reports that Hawkins will address the team at a meeting Tuesday morning. We will officially know whether or not he will finish out the season shortly thereafter.

The news of Hawkins’ dismissal does not come as a surprise, as many fans and alumni were hoping for new leadership after the 2009 season. Hawkins’ record at CU currently sits at 19-39. In his five seasons, the Buffaloes have never finished with a winning record and reached only one bowl game.

The final straw for the Colorado administration was likely the Buffaloes blowing a four-touchdown lead at Kansas on Saturday.

Assistant coach Brian Cabral likely would take over for the remainder of the season if Hawkins does not finish out the campaign.

Rumors have swirled for months about possible replacements for Hawkins. Prominent names that have been linked to the job include former CU boss Bill McCartney, former Buff and current NFL assistant Eric Bieniemy and former Buff Dave Logan.

LSU head coach Les Miles, a former Colorado assistant under McCartney, has said in the past that he loves Boulder and has been brought up as a possibility by Denver columnists because of his own hot seat status coming into the season. But Miles has the Tigers riding high after their win over Alabama.

The Buffs would be crazy not to pursue Miles, but would the interest be mutual?

UPDATE: According to a press release issued by the school Tuesday morning, Hawkins has been relieved of his duties as head coach effective immediately. Associate head coach Brian Cabral will serve as the interim head coach for the final three games of the season.