He wouldn’t be the big-name hire many Miami fans may have expected, but Al Golden certainly is qualified to take over the Hurricanes program.

And according to ESPN.com’s Bruce Feldman, the Temple head coach has been offered the head gig at Miami and is expected to accept it. However, the deal reportedly has not been finalized yet. 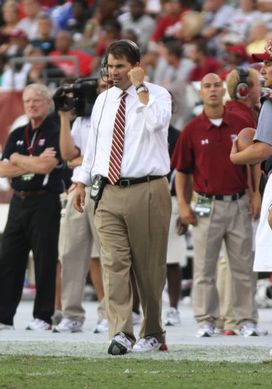 ICONTemple's Al Golden is reportedly close to being named the new head coach at Miami.

The 41-year-old would succeed Randy Shannon, who was fired after a loss to South Florida in the regular-season finale.

In five seasons at Temple, Golden built up an Owls program that finished 1-11 in his first year. But in the past two campaigns, Golden has won 19 games, including an 8-4 mark in 2010. However, despite the success this season, including a win over Fiesta Bowl-bound Connecticut, they were not invited to a bowl game. Golden led Temple to its first bowl game in 30 years in 2009.

Before arriving in Philadelphia, Golden was Al Groh’s defensive coordinator at Virginia, as well as an assistant under Joe Paterno at Penn State and under Tom O'Brien at Boston College.