Report: Gruden, Miami to finalize details of a contract

As we discussed here at the NFP Sunday afternoon, ESPN Monday Night Football analyst Jon Gruden is reportedly the top candidate to replace Randy Shannon at the University of Miami.

The Gruden-to-Miami story blew up throughout the afternoon and into the evening Sunday but had seemingly slowed down after a prominent journalist refuted the story on Twitter.

But where there's smoke, there's always fire. And the 47-year-old Super Bowl-winning coach unquestionably remains a candidate for the open position.

Steve Gorten of the South Florida Sun-Sentinel reported Tuesday evening that the possibility of the former Oakland Raiders and Tampa Bay Bucs head coach becoming the leader of the Hurricanes program “definitely still is in play,” according to a source with knowledge of the situation. 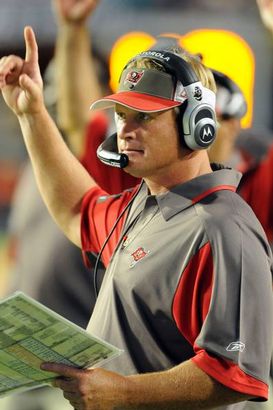 ICONJon Gruden would be the slam-dunk hire Miami desires.

Discussions have continued between both sides despite Gruden’s statement through ESPN Sunday night that he is “committed to Monday Night Football and to ESPN.”

Gorten tweeted Tuesday night that a meeting between Miami athletic director Kirby Hocutt and Gruden, which was reportedly scheduled for Wednesday, may even happen tonight.

According to Gorten’s source, Gruden and the university have yet to agree upon the length of a contract, but money does not appear to be an issue. The television analyst reportedly initiated contact with the school a few weeks before Hocutt fired Shannon on Saturday night.

There does remain concern within the Miami administration, however, that Gruden could still jump to the NFL — which would potentially set back the program even further.

Miami is clearly looking to make a splash with this hire, and Gruden would give the Hurricanes a fiery, offensive leader — essentially the opposite of the ousted Shannon.

The same source believes that Mississippi State head coach Dan Mullen likely would be the Hurricanes' next choice if an agreement isn't reached with Gruden.

Check out the brand-new NFP Message Boards and let your voice be heard on all things college football.