Report: Gruden to leave ESPN and coach at Miami

If Jon Gruden indeed leaves ESPN’s Monday Night Football booth, it may not be for an NFL head coaching job after all.

According to Lake Lewis of Sports Journey Broadcast Network, the former Oakland Raiders and Tampa Bay Bucs head coach will take over for the dismissed Randy Shannon at Miami. 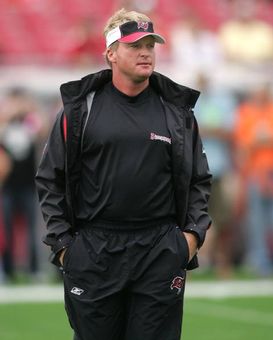 ICONWill Jon Gruden be roaming the college sidelines next season?

The reported deal would be worth roughly $3 million per season.

My scoop on Gruden to UM is from a credible source I respect who is a former ESPN radio guy and also another scoop is a UM great. No lies here...

Whether or not the report is true, there’s no question that Miami’s administration is looking to make a splash with this hire, and Gruden would give the Hurricanes a fiery, offensive leader — essentially the opposite of the ousted Shannon.

It obviously seems to be too soon for Miami to have a replacement for Shannon set in stone, and the 'Canes are expected to perform a thorough national search. However, at the very least, could Gruden be the top contender for the opening?