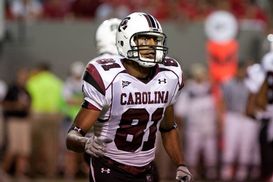 According to a report, the third-year sophomore has decided to pursue the NFL Draft following the team’s bowl game and will not return to school. Gurley reportedly has informed head coach Steve Spurrier and the staff of his plans.

The 23-year-old Gurley believes the time is right to make the jump to the NFL, especially knowing that he will once again be the No. 2 receiver behind Jeffery.

Gurley is second on the team this season with 42 catches for 416 yards and 4 touchdowns. In two seasons with the Gamecocks, he has 73 catches for 856 yards and 6 scores.

Spurrier confirmed last week that Gurley, along with redshirt junior offensive lineman Rokevious Watkins, has sent his information in to the NFL for review. Players have until January 15 to put their name in the draft.