This certainly isn’t the way to campaign for a Heisman Trophy.

Oklahoma State’s Justin Blackmon was arrested on a DUI complaint at 3:45 a.m. Tuesday in Carrollton, Texas, according to the Tulsa World. 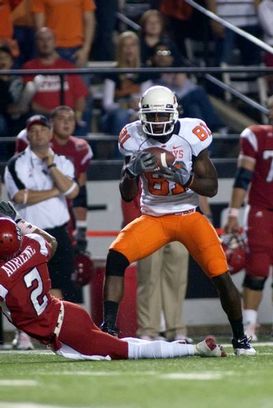 The sophomore wide receiver and three friends were driving back to Oklahoma after attending the New York Giants-Dallas Cowboys Monday Night Football game in Arlington.

Blackmon, who does not turn 21 until January, was reportedly driving 92 mph in a 60 mph zone. After being pulled over, field sobriety tests were given on the side of the road, where an officer determined that there was a detectable amount of alcohol on the OSU player.

Blackmon, the nation’s leading receiver in yards per game, scoring and touchdown catches, posted a $375 bond and was released from jail at 8:06 a.m.

OSU head coach Mike Gundy canceled media interviews for Tuesday, but the university is expected to issue a statement this afternoon. It is unknown whether the receiver will be suspended for Saturday’s game at Kansas State.

In seven games, Blackmon has 62 catches for 1,112 yards and 14 touchdowns. He is on pace to break several single-season school records.