We’ve been down the Bob Stoops-to-INSERT SCHOOL road before, so everything involving the Oklahoma head coach should be taken with a grain of salt. 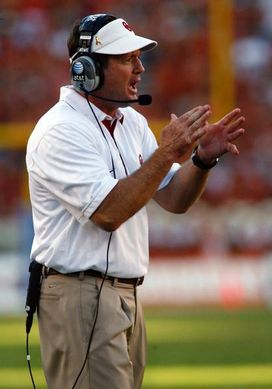 But as of late Saturday morning, GatorCountry.com was reporting that Stoops is finalizing a contract to succeed Urban Meyer as the face of the Florida program.

According to the report, Stoops is negotiating with athletic director Jeremy Foley and the Gators administration, with former quarterback Kerwin Bell possibly becoming the team’s offensive coordinator.

The website’s Raymond Hines does caution that the deal could still break down, and that Utah head coach Kyle Whittingham and Texas defensive coordinator Will Muschamp have been added to Foley’s B-list — the backup plan if Foley can’t bring in a big name.

Boise State head coach Chris Petersen is reportedly one of the names on the A-list.

Stoops, of course, served as defensive coordinator in Gainesville for three years under Steve Spurrier.