If the report is true, Florida’s new head coach will be from the Big 12 after all. 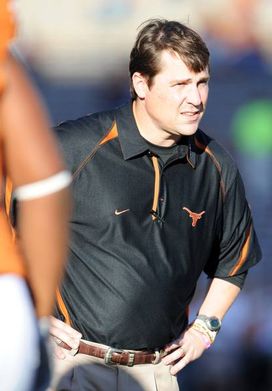 ICONWill Muschamp could be on his way to Gainesville.

Two sources told The Florida Times-Union Saturday night that Texas defensive coordinator Will Muschamp will be announced as the next leader of the Gators football program.

Oklahoma’s Bob Stoops was reportedly negotiating to take over at Florida Saturday morning but that report was refuted by the Sooners head coach.

The 39-year-old Muschamp, who was the Longhorns’ designated head-coach-in-waiting for Mack Brown, would take over for Urban Meyer after the Gators’ Outback Bowl game against Penn State on January 1.

Muschamp has been a rising head coaching candidate after successful stints as coordinator at LSU and Auburn. But the last time UF athletic director Jeremy Foley rolled the dice on a head coach — and this would be a roll of the dice as Muschamp has never been a head coach — he hired former Gators defensive coordinator Ron Zook in 2002. After three subpar seasons, Zook was fired midway through the 2004 campaign.