Despite his team falling to Oklahoma 48-20 in the Fiesta Bowl on New Year’s Night, Connecticut head coach Randy Edsall remains a hot commodity on the coaching market. 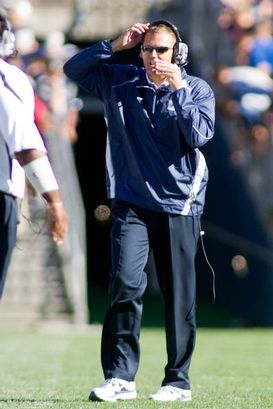 ICONCould Randy Edsall be on the move to College Park?

According to The Washington Post, Edsall has emerged as the leading candidate to replace Ralph Friedgen as head coach at Maryland. Per the report, Edsall and his family are expected to travel to College Park to receive a tour of the campus on Sunday.

The likelihood of former Texas Tech head coach Mike Leach getting the job apparently has diminished considerably within the past two days. Leach had been considered the frontrunner to replace Friedgen, whose contract was terminated following a 10-year run and a 51-20 Military Bowl victory over East Carolina.

The 49-year-old Leach had an 84-43 record in 10 seasons at Texas Tech, including 10 bowl appearances and an 11-2 finish in 2008. His “Air Raid” offense was thought to be one of the selling points for Maryland brass, as it was believed that an exciting brand of football could sell more tickets at an expanded stadium.

But some within the Maryland program are concerned about Leach’s pending legal issues.

The 52-year-old Edsall has compiled a 74-70 record in 12 seasons at Connecticut, including five bowl appearances and a share of two Big East titles. He stands as the winningest coach in Connecticut program history and rallied the Huskies from a 3-4 start to a BCS berth in 2010.

Anderson said that he preferred to have a new coach named by Jan. 4, which marks the start date of a period in which coaches can have contact with potential recruits.