The 2013-14 college football bowl season continues on New Year's Day as the Rose Bowl takes place between Michigan State and Stanford in Pasadena.

Here are some things to keep an eye on when you're tuned into the contest between the Spartans and the Cardinal.

The Spartans are finally back in the Granddaddy of Them All for the first since 1988 after they defeated Ohio State in the Big Ten title game. Michigan State has won nine straight games and is making its first BCS appearance in the postseason format's final year.

Meanwhile, the Cardinal were in Pasadena last season and have gone to four straight BCS bowls overall. David Shaw's squad has won six of seven contests, including the Pac-12 title game over Arizona State. 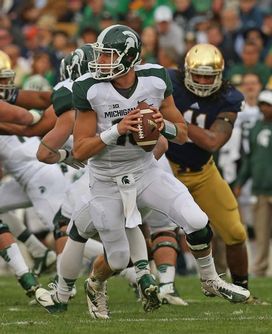 Connor Cook has thrown for 2,423 yards and 20 touchdowns this year.

Cook's improvement: Spartans quarterback Connor Cook took significant strides as the season went along after he wrested the starting job away from Andrew Maxwell. The sophomore excelled in the conference title game against Ohio State and has thrown for 2,423 yards and 20 touchdowns against just five interceptions this year. He will be going up against the best defense the team has faced all season, however, as the Cardinal did not allow more than 28 points to an opponent all year. The Stanford defense has talent littered all over the unit, but it's led by second-team All-America linebacker Trent Murphy, who has 14 sacks and 21.5 tackles for loss. On the year the Cardinal are tied for the FBS lead with 40 sacks.

Can Stanford continue to rely on the run?: The Cardinal have been carried at times by tailback Tyler Gaffney, who has over 300 rushes for over 1,600 yards and 20 touchdowns this year after missing a season to focus on his baseball career. He runs behind the nation's best offensive line, but he will be facing a defense that leads the FBS in total defense at 248.2 yards per game. However, star linebacker Max Bullough is suspended for the Rose Bowl, so Kyler Elsworth will need to have a sound game in his absence. He will call the defensive signals in Bullough’s place and be expected to help contain the Stanford inside rushing attack. If the Spartans can hold down Gaffney, Cardinal quarterback Kevin Hogan will have to resemble the player we saw for the most part at the end of last season. He didn't take as big of strides as I thought he would this year, although there were seven games in which he had 20 or fewer passes. I think he goes over that mark in Pasadena. Also look for the Cardinal to pass on some early downs to throw off the MSU defense. But Gaffney, who has rushed for at least 85 yards in every game but one and has nine games in triple digits, will be the focal point.

If all else fails: If Stanford is in need of a spark, receiver Ty Montgomery is the nation's best kickoff returner, as he averages over 30 yards per return and has run two back for touchdowns this year. That field-position advantage would be huge in a game against the stout Spartans defense. Montgomery will also be the focal point of the Stanford passing attack when Hogan does get the chance to throw the football. He has 58 catches for 937 yards and 10 touchdowns, while Devon Cajuste is averaging 21.9 yards per grab. Can Hogan connect with the pair on a couple of big plays?

Odds and ends: The Cardinal are favored by 6.5 points ... The Spartans lead the all-time series 3-2 ... This is the 100th edition of the Rose Bowl, and Stanford played Michigan in the very first one ... The last time these teams met, Stanford defeated Michigan State 38-0 in the Sun Bowl in 1996.