The 2014-15 college football postseason continues on Monday with the Russell Athletic Bowl between Clemson and Oklahoma at the Citrus Bowl.

Let's take a closer look at the matchup between the Tigers and the Sooners.

Dabo Swinney's Tigers are looking for their fourth consecutive season with double-digit victories. Clemson was 10-4 in 2011, 11-2 in 2012 and 11-2 in 2013. The Tigers boast a defense that ranks No. 1 nationally in total defense, giving up only 259.6 yards per game, including just 97.7 yards per game on the ground, and just 17.6 points per contest. The unit, which features six players that earned all-ACC recognition, will be tested against a Sooners offense that averages 38.9 points per game and 480.5 yards of total offense per contest. The Clemson offense, meanwhile, will be without standout true freshman quarterback Deshaun Watson, who will miss the game after suffering a torn left ACL. The Tigers will need a strong game from senior Cole Stoudt, who passed for 1,573 yards and six touchdowns in six games this fall. But he is not the dynamic dual-threat type of athlete that Tiger fans are used to seeing at QB, and the offense will be run by co-coordinators, as former OC Chad Morris left for the head gig at SMU. Stoudt will try to move the ball against a defense that gave up a combined 86 points in its final two losses, but the offense will be much less explosive without Watson. 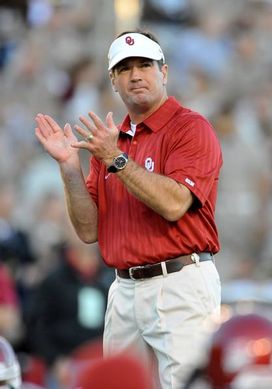 ICONBob Stoops and the Sooners started 4-0 before splitting their final eight games.

The Sooners, meanwhile, are looking to notch another season of double-digit victories for the 13th time in 15 seasons. But it's been a real disappointing year in Norman, as the Sooners were No. 4 in the preseason AP Top 25 poll and started 4-0 before splitting their final eight games, including dropping three home games. A lot was expected of this team after beating Alabama in last year's Sugar Bowl, so Bob Stoops and Co. will look to at least salvage a bowl win. The centerpiece of the offense is running back Samaje Perine, who is No. 5 in the nation with 21 rushing touchdowns and No. 8 with 1,579 rushing yards, including the FBS-record 427 yards on the ground against Kansas.

Other notes: The Sooners are favored by 3.5 points ... OU leads the series 2-1 ... This is a rematch of the 1989 Florida Citrus Bowl, which the Tigers won 13-6 in OU head coach Barry Switzer’s last game ... This is the 16th straight bowl appearance for the Sooners (28-18-1 overall in bowls) ... Clemson defensive coordinator Brent Venables, who should get a head gig sooner rather than later, was OU's co-defensive coordinator with Mike Stoops from 1999-2003 and the lone DC from 2004-11 before Clemson hired him in 2012.