Let's take a look at some of the most important aspects of this matchup between the Scarlet Knights and the Hokies.

• The motivation factor: Rutgers had a great chance to land a BCS berth this season, but Kyle Flood's squad laid an egg at Pittsburgh before falling to Louisville in the regular-season finale. So the Scarlet Knights will now be playing a Virginia Tech squad that became eligible for the postseason by winning its final game. Because they are playing a six-loss team and not Florida in the Sugar Bowl, will the Scarlet Knights be 'up' for this matchup? Certainly, Virginia Tech will be 'up' after just sneaking into the postseason. While the Hokies were unquestionably one of the more disappointing teams in the nation this fall, as they are struggling through their worst campaign since 1992, Frank Beamer's squad can still finish with a winning record despite all of their travails. 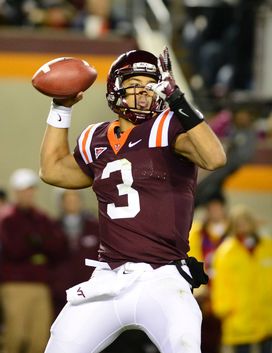 US PRESSWIRELogan Thomas has had five multi-INT games this fall.

• Good Logan/Bad Logan: The Hokies can only be as good as their quarterback allows, and there's no question that Logan Thomas had a rough season in 2012 despite the highest of expectations. He completed only 52.6 percent of his passes and tossed 14 interceptions, including five multi-pick efforts. He was working behind a new offensive line with a new starting running back and a new set of receivers, but much more was expected of a signal-caller who was praised by many NFL Draft experts throughout the offseason. He obviously possesses a boatload of talent, but much more will be expected of him if he comes back for a final season in Blacksburg.

• Good Gary/Bad Gary: The struggles of Thomas have been well-documented, but Rutgers quarterback Gary Nova has dealt with his share of adversity, as well. While he isn't a top NFL prospect, Nova needs to give the Scarlet Knights more consistent play under center to complement the rushing of Jawan Jamison, who ran for 1,054 yards and four touchdowns this fall. Nova threw for 2,566 yards, the most by a Rutgers quarterback since 2008, but he threw 13 interceptions in the team’s final five games, including a disastrous six-pick effort against Kent State. And those struggles have trickled down to Jamison, as well, as he hasn't rushed for 100 yards in a game since October 20. But he's been banged-up, so the long layoff will help.

• The X-Factor: Thomas and Nova are always X-Factors, but keep an eye on the Virginia Tech defense, which is on pace to allow the most points in a season since 2003. Bud Foster's unit has surprisingly struggled all season long, so it will be interesting to see if Nova, Jamison and the Rutgers offense can finish the year strong against a susceptible unit. Meanwhile, Rutgers has a scoring defense that ranks No. 5 nationally. If the Scarlet Knights get a lead, the defense may not give it up.