Arkansas quarterback Ryan Mallett, who was knocked out of Saturday’s game against Auburn with a concussion, is improving after suffering the injury. 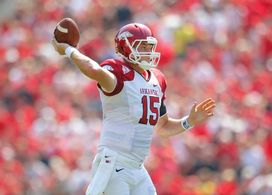 The school released a two-sentence statement on Sunday confirming the star’s injury. The release says that the 6-6, 238-pounder’s “symptoms are improving” and that “we will continue to evaluate him.”

The junior left the game Saturday in the first half after taking a blow to the head. Tyler Wilson replaced him under center in the 65-43 Auburn victory.

Despite tossing two interceptions, Wilson gave the Hogs a valiant effort off the bench, completing 15 of his first 17 passes for 270 yards and four touchdowns.

Mallett has thrown for 1,844 yards and 14 touchdowns this season.