Today at the NFP marks the third of seven post-spring conference power rankings, continuing with the SEC.

1. Alabama: The Crimson Tide remain atop the rankings after claiming the BCS national championship over LSU in dominating fashion. Quarterback AJ McCarron and running backs Eddie Lacy and T.J. Yeldon will pace an offense that should have more playmakers at the receiver position. Still, it will be very difficult to repeat when so much defensive talent will be gone. But keep in mind that reloading is Nick Saban’s specialty, so keep an eye on junior college cornerbacks Travell Dixon and Deion Belue in the secondary as well as the linebacker trio of Nico Johnson, C.J. Mosley and Adrian Hubbard. Replacing nose guard Josh Chapman remains the biggest challenge. Jesse Williams, however, could be up to the task. 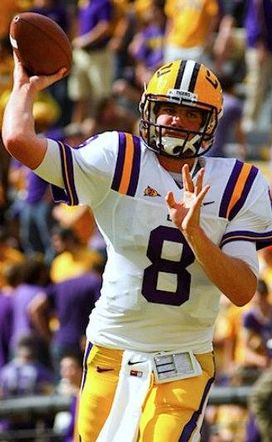 2. LSU: The Tigers are arguably the best overall team in the league heading into 2012, but the Crimson Tide will assume the top spot until they lose. With quarterback Zach Mettenberger giving Les Miles and Co. a pure dropback passer, expect this offense to open up a bit more with receivers Russell Shepard, Odell Beckham and Jarvis Landry. However, this team will still rely on a deep and effective stable of running backs. And that defense will remain one of the best in the country because of its depth and returning experience under coordinator John Chavis.

3. South Carolina: The Gamecocks have brought in top-quality defenders in their last few recruiting classes, so there's a lot of talent on the defensive side of the ball for new coordinator Lorenzo Ward. Keep an eye on Jadeveon Clowney, who will kick inside to tackle on passing downs much like Melvin Ingram. Stud running back Marcus Lattimore should be 100 percent healthy after coming back from his ACL injury, but Ace Sanders, Damiere Byrd and Shamier Jeffery — Alshon’s younger brother — must step up at receiver for quarterback Connor Shaw, who continues to develop. He is the straw that stirs the drink for this team’s offensive fortunes. If he continues to develop as a passer, South Carolina could return to the SEC championship game.

4. Arkansas: The Razorbacks are arguably the most intriguing group in the nation heading into the fall. The one major question, besides if John L. Smith can keep this team focused, is whether the Hogs can snag an elusive victory over either Alabama or LSU — West division foes that the Hogs get at home in 2012. This team was getting better each season on Bobby Petrino’s watch, but taking the next step defensively will need to occur under new coordinator Paul Haynes. Expect a little more risk-taking on that side of the ball, where steady veterans such as Jake Bequette and Tramain Thomas have been replaced. Offensively, Cobi Hamilton must emerge as a top receiving option with Jarius Wright, Joe Adams and Greg Childs gone. No matter who steps up at receiver and despite the fact that Petrino is gone, quarterback Tyler Wilson is in for a big year.

5. Georgia: The Bulldogs’ 3-4 defense flourished in the second season under coordinator Todd Grantham, but there are real concerns in the secondary. Emerging receiver Malcolm Mitchell had to move to cornerback, and four defensive starters will be sidelined due to suspension at the beginning of the season. Still, Georgia returns nine defensive starters overall, including perhaps the nation's best linebacker in Jarvis Jones. And even if Mitchell isn't lining up too much at receiver, the offense still has weapons around quarterback Aaron Murray. But can head coach Mark Richt’s team live up to the high expectations it will face after putting together a 10-game win streak to close the regular season? The health of running back Isaiah Crowell as well as the inexperienced offensive line will go a long way toward answering that question. The Dawgs don't have too difficult of a league schedule, with no games against Alabama, LSU or Arkansas.

6. Florida: The Gators desperately needed to find consistent playmakers on offense, which was new coordinator Brent Pease’s primary focus this spring. Receivers Andre Debose, Frankie Hammond and Quinton Dunbar combined to catch 45 passes for 829 yards and six touchdowns last season, but can they emerge as consistent options for rising sophomores Jacoby Brissett or Jeff Driskel, the two quarterbacks battling for the starting job? The play of the tight ends was disappointing this spring, and that's a position that needs to be productive in this offense. The suspect offensive line impressed head coach Will Muschamp with its toughness this offseason, and that unit will go a long way in determining just how good the Gators can be this fall. Defensively, Florida returns 10 starters from a unit that ranked eighth nationally in 2011. Safety Matt Elam paces the secondary, but how will end Ronald Powell and tackle Dominique Easley recover from their injuries?

7. Auburn: The Tigers made a jump up this list after getting comfortable with new coordinators on both sides of the ball — Scot Loeffler on offense and Brian VanGorder on defense. Look for the offense to employ a variety of formations, with a dependence on Onterio McCalebb in the run game with Michael Dyer now at Arkansas State. Rising sophomore quarterback Kiehl Frazier developed as a passer this spring and has the edge on Clint Moseley, who battled a sore shoulder. Defensive linemen Dee Ford and Corey Lemonier pace a youthful but energetic defense, a unit that will be much more aggressive under VanGorder. The Tigers are a group that can sneak up on some teams this fall.

8. Tennessee: This is the biggest season of Derek Dooley’s coaching career with the Volunteers. Offseason unrest on the coaching staff must be put on the backburner, as the program welcomed in seven new assistants. New defensive coordinator Sal Sunseri must be able to bring a little Alabama flair with him while keeping the unit playing at the high level it did under former coordinator Justin Wilcox, who is now at Washington. Quarterback Tyler Bray has top weapons at receiver in Justin Hunter and Da'Rick Rogers, but the team ranked 116th nationally in rushing while recording just 11 touchdowns on the ground in 2011. Marlin Lane and Rajion Neal, as well as Devrin Young and Tom Smith, will need to provide some semblance of a rushing attack. Lane led the way with 106 yards and a touchdown in the team's spring game.

9. Texas A&M: The Aggies enter their new league with first-year head coach Kevin Sumlin, who arrived in College Station after nearly leading Houston to a BCS bowl game. His first duty this fall, along with coordinator Kliff Kingsbury, will be to decide who will replace Ryan Tannehill at quarterback. Sophomore Jameill Showers has the inside track, but keep an eye on redshirt freshmen Johnny Manziel and Matt Joeckel. Sumlin ’s second major job will be to make the Aggies a tougher team in the second halves of games and to make sure a rushing attack paced by Christine Michael can complement his high-octane passing game. Left tackle Luke Joeckel leads an offensive line that returns four starters, but the secondary is suspect. 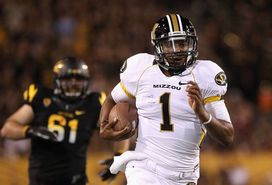 The health of James Franklin is the key to Missouri's hope in its debut season in the SEC.

10. Missouri: The Tigers had to replace their entire defensive line (except end Brad Madison) and three starters from the offensive line, though left tackle Elvis Fisher was granted a sixth year by the NCAA. Gary Pinkel’s spread offense will have to be a little bit more physical if it’s going to work in the rugged SEC, and the team suffered a setback when quarterback James Franklin missed most of the spring after having surgery on his throwing shoulder. But if he's healthy, the offense has enough firepower to continue to be effective. The defensive speed in the new league will be an adjustment, however, and a tough road slate looms.

11. Vanderbilt: The Commodores were one of the better stories in 2011 under first-year head coach James Franklin. The emergence of quarterback Jordan Rodgers was huge for this offense, but he’ll need to continue to develop and put his bowl game performance in the past. Running back Zac Stacy and receivers Jordan Matthews and Chris Boyd give Rodgers solid playmakers to utilize, but the depth of the offensive line is a concern. Defensively, Franklin will always have this unit playing tough and physical despite losing some key players, but linebacker Chase Garnham and defensive end Walker May should keep this unit solid.

12. Mississippi State: The Bulldogs need to improve defensively under Chris Wilson, whose unit didn’t play particularly well in its first season without Manny Diaz. Cornerbacks Jonathan Banks and Corey Broomfield return, but there is concern at the safety position after Nickoe Whitley tore his Achilles’ late last year. Offensively, Tyler Russell is now the fulltime starting quarterback with Chris Relf gone, but the Bulldogs must get junior college newcomers Dylan Holley and Charles Siddoway ready to play right away with so many questions on the offensive line. However, Russell will have a veteran receiving corps to work with, led by senior Chad Bumphis. Meanwhile, LaDarius Perkins and Nick Griffin pace the rushing attack.

13. Kentucky: The major concern for head coach Joker Phillips was finding playmakers this spring, and he came away fairly optimistic with the emergence of receivers Demarco Robinson and Daryl Collins. The Wildcats need to be strong along the offensive line, and they’ll be led by returning starters Larry Warford and Matt Smith. Quarterback Morgan Newton missed the spring because of shoulder surgery, so backup Maxwell Smith and freshman Patrick Towles are still trying to snag the starting job. Defensively, it will be beyond difficult to replace Danny Trevathan, and the Wildcats lost six starters in all from their linebacking corps and secondary combined.

14. Ole Miss: The Rebels will begin a new era under Hugh Freeze, who comes over from Arkansas State. The quarterback battle remains at the forefront, as holdovers Randall Mackey, Zach Stoudt and Barry Brunetti are trying to hold off junior college transfer Bo Wallace, whom Freeze coached in 2010 at Arkansas State. Freeze, of course, will be running a spread offense with an emphasis on the run. Keep an eye on the academic issue of top running back Jeff Scott. The offensive line is a huge question mark because of the transition to a new scheme, and this team struggled mightily on defense in 2011. Linebacker D.T. Shackelford is back after missing last season with a torn ACL. But the defense finished 110th nationally with just 13 sacks last fall, and it wasn’t a very opportunistic unit in forcing turnovers.