With the start of the 2013 college football season just a few days away, let's take a look at some power rankings for the SEC.

1. Alabama: The Crimson Tide will try to win their fourth BCS national championship in five seasons, and they have as good of a shot as any team because of an always sound defense and an offense that features quarterback AJ McCarron, receiver Amari Cooper and running back T.J. Yeldon.

2. Georgia: Todd Grantham's defense is incredibly young, and that is cause for concern despite being able to develop a little bit of depth last year. However, quarterback Aaron Murray and the running back tandem of Todd Gurley and Keith Marshall will operate behind a veteran offensive line for a unit that is expected to score a lot of points this fall.

3. South Carolina: Steve Spurrier has two very good quarterbacks in Connor Shaw and Dylan Thompson, and running back Mike Davis is solid. Star end Jadeveon Clowney leads a strong front, but will the young secondary and inexperienced linebackers get exposed?

4. Texas A&M: Independent of the Johnny Manziel saga, the Aggies will have a target on their backs all season long after their standout debut season in the SEC. Defensively, five starters have departed from the front seven. 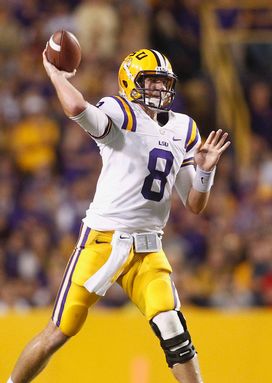 US PRESSWIREZach Mettenberger is expected to have a solid campaign for the Tigers.

5. LSU: The expectation is that the Tigers will be much improved on offense under new coordinator Cam Cameron, particularly quarterback Zach Mettenberger, who closed out the 2012 campaign strong. The defense lost an abundance of talent from last year's squad, however. The line should be okay, but there are questions at linebacker and in the secondary. Still, don't sleep on Les Miles and the Tigers.

6. Florida: Quarterback Jeff Driskel is expected to take the next step in his development after a full year of starting experience, but he needs to have more consistent and explosive weapons on the outside. Can UF rely heavily on a younger defense if it wants to play for the SEC title?

7. Ole Miss: Quarterback Bo Wallace and much of last season's surprise team returns. But there are still depth issues. Who will emerge as weapons for Wallace?

8. Vanderbilt: The Commodores have arguably the most underrated receiver in the country with Jordan Matthews, and the backside of the defense is the strength of the unit. An early test against Ole Miss on Thursday night will tell a lot about 2013 Vandy football.

9. Auburn: Bringing back Gus Malzahn to The Plains was the right move for the Tigers, and Ellis Johnson will have the defense playing at a fairly high level eventually. But Nick Marshall must limit his turnovers at the quarterback position.

10. Mississippi State: Quarterback Tyler Russell needs to find new weapons at receiver, and the secondary has to replace Johnthan Banks and Darius Slay at cornerback. Ends Denico Autry and Ryan Brown lead what should be a solid defensive line.

11. Missouri: The Tigers didn't adjust to SEC play quite like Texas A&M did, but top Class of 2012 receiver Dorial Green-Beckham should emerge as a true weapon if James Franklin stays healthy at quarterback and protection issues up front don't plague this offense.

12. Arkansas: New head coach Bret Bielema has instilled a new attitude and toughness within this program, and he identified his quarterback in redshirt sophomore Brandon Allen. But line play on both sides of the football will tell the tale of Razorbacks football in 2013.

13. Tennessee: The job that first-year head coach Butch Jones is doing on the recruiting trail in such a short amount of time is incredible, but the Vols have major issues on offense despite the O-Line being one of the best in the nation. Adapting well to the new 4-3 defensive scheme is crucial.

14. Kentucky: First-time head coach Mark Stoops is doing an amazing sales job in Lexington, where he has the football fanbase in a frenzy. Finding an identity on offense will be a chore, and the line will have to be the heart and soul of a young defense.