The process has been very slow, but the first College Football Playoff has taken one more step toward formation, with the postseason's selection committee remaining the No. 1 priority.

Matt Hayes of the Sporting News wrote on Wednesday that current athletic directors will be used on the committee, which was an issue that seemed to be a bit unclear throughout this offseason. And while CFP executive director Bill Hancock and his power brokers have not yet finalized anything, Hayes writes that one athletic director from each of the five power conferences are likely to make up the committee, as well as former coaches and players and possibly former media members (if an athletic director’s school is being discussed for playoff inclusion, he or she will not be in the room during its vote and he or she would stay in the room if a conference memeber is being debated). 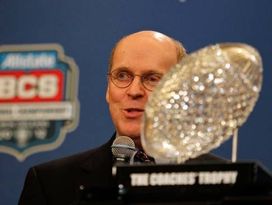 US PRESSWIREBill Hancock and Co. have a lot of work to do in putting together the CFP.

However, plenty of issues still remain.

First and foremost, the actual number of members remains up in the air. Will there be an equal number of current ADs, former coaches/players and ex-media members? And while the term "12 to 20 members" has been discussed, will it ultimately be on the larger or smaller side?

Second, the factors that these individuals will take into consideration when selecting the four teams for the semifinals remain uncertain. Of course, strength of schedule has been the major talking point since the College Football Playoff was announced. But there has been much concern among current coaches and ADs about how to schedule in the future, as they are uncertain about making their slates too difficult at the risk of being shut out of the four-team postseason system because of a loss to a nonconference team that they otherwise could have avoided.

What we do know is that neither human polls nor computer rankings will factor into the committee's decisions. But will a metric such as the RPI, which is used by the NCAA basketball committee, be developed? And how effective would such a metric be considering football teams play 12 or 13 games compared to basketball squads, which play roughly 30 per season?

Perhaps the biggest hurdle to overcome, though, once the committee officially gets settled is how the selection process will be presented to the public throughout each season, beginning in 2014. With so much negativity surrounding the BCS selection process now, transparency is of utmost importance. And while most college football fans have disliked the BCS and yearned for a playoff system for years, the weekly release of the BCS standings was great for the sport.

But how exactly will the College Football Playoff process work in regards to ranking teams and releasing those standings to the public? How often will the committee even meet throughout the year?

Hancock mentioned this past spring that the thought was initially to have a few poll releases during the regular season before the final four teams for the playoff are announced. That, however, would be a mistake because both fans and media would likely voice their displeasure at not being "in the know" about teams in the running. People can argue against the BCS all they want, but at least teams knew where they stood throughout most of the regular season in regards to the BCS rankings. Releasing two or three polls leading up to the final selection of four teams in a landscape dominated by social media could be disastrous. It would also make the committee members open to criticism far beyond what they may have expected.

The other issue that Hayes brings up in his piece is the concern among some people putting together the playoff that not releasing a weekly ranking will allow the AP and Coaches' polls to essentially give fans a false sense of which teams may be included in the playoff. Keep in mind the history that the AP and Coaches' polls have had in this sport. If the CFP poll isn't released until late in the year or is not released weekly, it may not get lost in the shuffle but it could lead to fans clamoring for explanation if it conflicts severely with the other two polls.

Hancock and the other major power brokers in the sport know how much pressure will be on committee members, so being as transparent as possible in the process will at least help limit the intense scrutiny.

How to do that, however, remains incredibly complicated as we head toward the final season of the BCS.