Margus Hunt entered the 2012 college football season as one of the most intriguing seniors to watch for many NFL draft experts. 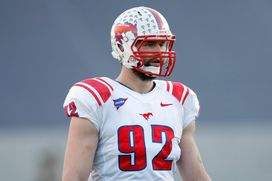 US PRESSWIREMargus Hunt is poised to steal the show at the upcoming NFL Combine.

The 6-8, 280-pound SMU defensive end has an 82-inch wing span, can bench press 225 pounds 35 times and has 4.7 speed in the 40-yard dash. Because of those measurables, NFL personnel certainly had to have taken notice.

But coming into Christmas Eve night's Hawaii Bowl matchup with Fresno State at Aloha Stadium, Hunt's play in 2012 had been a disappointment. Considering he had been tabbed as a potential first-round pick in April's NFL Draft, his play was underwhelming for much of the season.

However, Hunt had a dominant first half in helping the Mustangs take a 22-0 lead at the break, as he was in the face of Bulldogs quarterback Derek Carr throughout the early part of the evening. SMU, which was a 12-point underdog, finished the night with a rousing 43-10 win.

Hunt had pedestrian numbers of 8.5 tackles for loss and six sacks this fall, but Monday night he registered three tackles for loss, two sacks, two forced fumbles and a safety — in the first half. The Estonian track and field star, who had no experience playing American football until 2009 after winning gold medals in both the shot and discus at the 2006 World Junior Championships, has made a career as a special teams menace. But that is just a bonus trait for a player who can make an impact as a defender at the next level.

He took the nation by storm in his first season at SMU, blocking seven kicks and becoming a legitimate threat in the third phase for the Mustangs. He entered the Hawaii Bowl contest with 17 combined blocked field goals and extra points, which ties for second in NCAA history in the number of career blocked kicks. Because of his freakish athletic ability, as documented by Bruce Feldman of CBSSports.com this past offseason, the player nicknamed the "Eastern Block" is expected to put up ridiculous numbers at the upcoming NFL Combine. And that will undoubtedly translate into a high-round draft selection.

Former Memphis defender Dontari Poe was the talk of the 2012 Combine, and he was taken 11th overall by Kansas City. Hunt, who projects as a 4-3 end, will very likely steal the show in Indianapolis when players convene at Lucas Oil Stadium this offseason. And his stock will only continue to grow because his lack of experience increases his potential in the eyes of many scouts.

He may have gone under the radar a bit throughout the regular season, but now is as good a time as any to become familiar with Margus Hunt, who we will next see play in the 2013 Senior Bowl.