Son of NBA Hall of Famer commits to Notre Dame 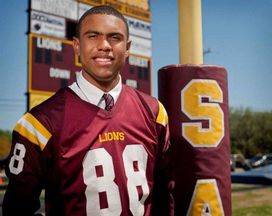 Class of 2013 WR Corey Robinson has given a verbal commitment to Notre Dame.

Class of 2013 wide receiver Corey Robinson from San Antonio, TX, participated in Notre Dame's Junior Day this past weekend before taking a trip to Wake Forest early Tuesday. Fighting Irish head coach Brian Kelly and his staff clearly made quite the impression as Robinson decided to commit on the same day he visited the Demon Deacons.

The 6-4, 195-pounder from San Anthonio Christian received his offer from ND last month and held offers from Iowa, Kansas, North Carolina, Wake Forest and Navy, where his father was a basketball star. The Irish, however, were the first program to offer him a scholarship.

Last fall, Robinson hauled in 42 passes for 660 yards and 10 touchdowns. He has been praised not only for his pass-catching ability but for his blocking as well.

Robinson, whose recruitment started to gain real momentum after his U.S. Army All-American national combine performance in January, is the sixth pledge in three days for the Fighting Irish following their Junior Day and the ninth overall for the Class of 2013.