South Carolina continues its brutal stretch of tough contests when it travels to Gainesville on Saturday afternoon for an SEC East clash with Florida at The Swamp.

The Gamecocks are coming off of a loss to LSU in Death Valley one week after blasting Georgia at home, while the Gators remained unbeaten last week by surviving a scare in Nashville against Vanderbilt.

South Carolina head coach Steve Spurrier’s last trip to The Swamp on November 13, 2010, ended with a victory and a clinched spot in the SEC title game, while Florida head coach Will Muschamp is looking to earn a BCS berth in just his second year in Gainesville. The Gamecocks would control their own destiny in the East division with a win.

Let's take a look at three things to watch in the clash between the Gamecocks and the Gators on Saturday. 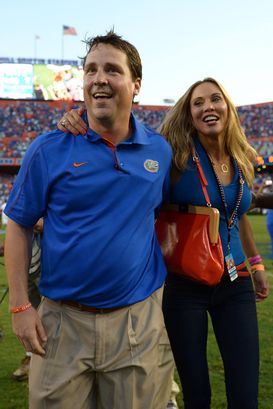 US PRESSWIREWill Muschamp will try to keep the Gators unbeaten and on the path toward an SEC East crown.

1. The health of the Gamecocks: South Carolina star running back Marcus Lattimore missed practice this week with a bruised hip and may not start -- or even play. The powerful and shifty tailback is sixth in the SEC with 584 yards on the ground and is tied for the league lead with 10 touchdowns, but he was held in check last week by a nasty LSU front. Still, his presence alone is key for the Gamecocks. If he isn't on the field, it's a blow to Spurrier's offense because then so much of the offensive load would fall on quarterback Connor Shaw's shoulder. Shaw has been great, both on the ground and through the air. But like any quarterback, he will be less effective on longer third-down opportunities and he will get worn down more if he has to carry more of a rushing load.

2. Nixon vs. Clowney: Gators left tackle Xavier Nixon will have his hands full going up against Gamecocks defensive end Jadeveon Clowney, who is arguably the best defender in the country. Nixon has shown flashes this season but has been inconsistent, and he is coming off of an upper body injury suffered in last week’s win at Vanderbilt. Meanwhile, Clowney leads the Gamecocks with 6.5 sacks but is nursing a problem with his foot.

3. Controlling the tempo: Florida's offense isn't as sexy as it was under Spurrier or Urban Meyer, and that's just fine with Will Muschamp. The Gators head coach brought in first-year coordinator Brent Pease to run a physical, downhill offensive attack with some misdirection mixed in, and that's exactly what the former Boise State OC has done thus far. Running back Mike Gillislee is second in the SEC with 615 yards on the ground, and he has seven scores on the ground. The Gamecocks gave up 258 yards on the ground to LSU last week in their loss at LSU, and the UF offensive line has played well all season in the run game. Quarterback Jeff Driskel is always a threat when he's on the move, but he will face a dangerous Gamecocks pass rush. Look for Pease to try to establish the Gators' downhill rushing attack while mixing in Trey Burton, Frankie Hammond, Jordan Reed and Omarius Hines in the east-to-west game.