Spring football wrap-up: What we learned

With college football's spring season coming to an end, let's take a look at some things we learned over the last two months or so as we get closer and closer to the start of the 2013 campaign.

The dawning of a new era at Florida State

Jameis Winston will be the starting quarterback at Florida State, where he will take over for EJ Manuel, who was selected by the Buffalo Bills in the first round of the NFL Draft. While Seminoles head coach Jimbo Fisher has not stated that the competition for the starting job under center is over, make no mistake that the Winston era has commenced in Tallahassee. Clint Trickett saw the writing on the wall, which is why he elected to transfer to West Virginia. The redshirt freshman Winston will still get pushed by Jacob Coker, who has an intriguing skill set. But Winston’s performance this spring, which he capped off by going 12-of-15 for 205 yards and two touchdowns in the team's spring game, was enough to let Fisher know that he is ready to lead this complex offense. 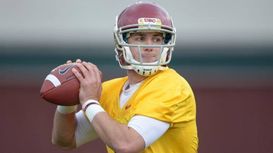 US PRESSWIRECody Kessler will try to win the starting QB job at USC this fall.

Trojans head coach Lane Kiffin still doesn't know who will replace four-year starter Matt Barkley at quarterback, and that's just one of many questions that the team faces after its extremely disappointing 2012 campaign. The end of spring drills saw sophomore Cody Kessler with perhaps a slight lead on Max Wittek, who started the final two games of last season but turned in uneven performances. Kessler completed 15-of-22 passes for 242 yards and three touchdowns in the spring game, and true freshman Max Browne will also be part of the mix in the fall. No matter who gets the nod under center, he will have capable playmakers in running back Silas Redd, Biletnikoff Award-winning receiver Marqise Lee, emerging playmaker Nelson Agholor and a strong offensive line. But will there be consistency under center?

The continued development of Miller

Braxton Miller, who will headline a lot of preseason Heisman Trophy lists, is entering his second season in Urban Meyer's offense. And the chatter coming out of Columbus is that the dual-threat signal-caller is becoming more of a vocal leader and a stonger presence both on and off the field. The Buckeyes should get good enough production from their running backs to complement what Miller does with his legs, and Meyer wants his QB to rely a litte less on his running when his first throwing option isn't open. Going through his progressions rather than leaving the pocket was a bigger focus this spring for Miller, and Philly Brown could be primed for a huge season at receiver. The Buckeyes are bowl-eligible and a likely contender for a spot in the BCS title game, but Meyer must be able to keep his team hungry. Miller, the 2012 Big Ten offensive player of the year, is one of nine offensive starters returning. And he's only getting better.

The other traditional Big Ten power

While much of the talk in Big Ten circles has centered on Braxton Miller and the Buckeyes, Michigan has gone under the radar a bit as the Wolverines begin their third season under Brady Hoke, who is undefeated at home as the team's head coach. With Denard Robinson gone, Devin Gardner will enter the season as the unquestioned leader of the offense. And he's looking to pick up where he left off after his fantastic final stretch to the 2012 campaign after he took over starting duties. Gardner is a perfect fit for this Al Borges offense, and I believe that his throwing ability is still being taken for granted because he is such a good athlete. Michigan needs to get better on the ground, and the hope is that true freshman Derrick Green can help out Fitz Touissant. Nonetheless, Gardner is ready to answer a lot of critics with a full season of solid football.

No Kelly, no problem

Chip Kelly is no longer orchestrating Oregon's prolific offense, as the former Ducks head coach left the college game to try his hand at the NFL with the Philadelphia Eagles. But Mark Helfrich was ready to become the face of a program, and he will continue to keep this offense running smoothly behind quarterback Marcus Mariota, do-everything athlete De’Anthony Thomas and tight end Colt Lyerla. In the team's spring game, the Ducks looked every bit as potent as they were last season when they finished second in the country in scoring at 49.5 points per game. Helfrich, who was Kelly’s offensive coordinator the past four seasons, was able to keep most of the coaching staff intact. And that cohesiveness showed this spring.