Alabama begins spring practice on Saturday following a disappointing end to its 2013 campaign.

Let's take a look at some of the issues facing Nick Saban and the Crimson Tide as they prepare for their spring game on April 19.

Waiting for Coker: The battle to replace longtime starter AJ McCarron at quarterback commences this spring, but will either senior Blake Sims, redshirt sophomore Alec Morris, redshirt freshmen Parker McLeod and Cooper Bateman or early enrollee David Cornwell make enough of an impact to have a big lead on Jake Coker? The former backup to Jameis Winston did not leave Florida State to remain on the sideline, but Coker will not be on campus this spring. The QB who played at the same high school as McCarron has good size and a very good arm, but the redshirt junior could face stiff competition when he arrives because he has zero career starts and will miss all of spring drills. Sims, Morris, McLeod, Bateman and Cornwell have all been highly recruited signal-callers, so Coker will have work to do. Sims has seen action as McCarron's backup, is the most athletic and could run the read-option. But can he be effective in the pocket as a dropback passer? Bateman, who came to 'Bama as an early enrollee last year, could be the real threat to Coker. So all eyes this spring will be on who could give new offensive coordinator Lane Kiffin reason to believe that the unit could be in good hands until Coker arrives in Tuscaloosa — and possibly beyond. 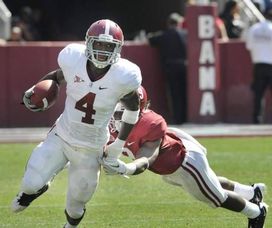 Bevy of offensive talent: T.J. Yeldon will be on most every preseason Heisman Trophy Watch List because he's one of the top running backs in the country playing in a run-first offense. The star has back-to-back 1,000-yard rushing seasons under his belt and will only get better — which is scary. But all eyes will be on Derrick Henry, whose coming-out party came in the Sugar Bowl after getting just 28 carries in the regular season. He recorded 161 yards and two touchdowns against Oklahoma in that game, and we all saw how fast he is despite being 238 pounds. He will take carries away from Yeldon, but that's not a bad thing — that's how well Saban recruits. And the Tide have talent and depth at wide receiver as well. Amari Cooper is one of the best in the country when healthy, while DeAndrew White and Christion Jones are solid and productive. Meanwhile, Robert Foster and Chris Black have a chance to crack the rotation. Losing Kevin Norwood and Kenny Bell? No problem for the Tide.

Lack of depth in the secondary: With the departure of safeties Ha Ha Clinton-Dix and Vinnie Sunseri as well as some unproven players at cornerback, there are holes in the secondary. However, help comes in the return of Nick Perry, who started four games in 2012 and played a few games last year before a season-ending injury. He has a lot of experience and could be the best option to start opposite Landon Collins at safety. Saban has asked offensive players such as Dee Hart and Cyrus Jones to work at cornerback in the past, so keep an eye on ArDarius Stewart, who may be asked to move to defense.

Kiffin is not the only change to occur on the coaching staff. Kevin Steele is the new linebackers coach and Bo Davis is the new defensive line coach. Defensive coordinator Kirby Smart is now also coaching the secondary.

There are a number of JUCO transfers that could play key roles for the Tide in the fall. Defensive end D.J. Pettway is back in Tuscaloosa, and defensive tackle Jarran Reed has a chance to earn reps in the middle. Offensive tackle Dominick Jackson has a chance to replace Cyrus Kouandjio, while former Georgia tight end Ty Flournoy-Smith will try to take some catches away from emerging star O.J. Howard.