Let's take a look at some of the issues facing the defending ACC Coastal division champion Blue Devils as they prepare for their spring game on March 1 at Wallace Wade Stadium. 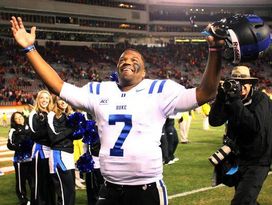 Anthony Boone leads an experienced Duke offense back on the field for spring drills.

Same old offense?: The Blue Devils lost excellent offensive coordinator Kurt Roper to Florida, so wide receivers coach Scottie Montgomery will take over OC duties. Cutcliffe has not yet completed his offensive staff, as he has to hire either a new wide receivers coach or a new quarterbacks coach depending on the position group Montgomery will handle this year. What is certain is that this offense will resemble the same one that we have seen under Cutcliffe, who gets back a lot of talent from last year's squad, including redshirt senior quarterbacks Anthony Boone and Brandon Connette. The pair combined for 4,023 yards and 45 touchdowns last fall. Wide receiver Jamison Crowder is also back after setting an ACC single-season record for catches (108) as is productive tight end Braxton Deaver. The team will have to replace guard Dave Harding and tackle Perry Simmons as well as wide receiver Brandon Braxton, but that is it. Keep an eye on redshirt junior Lucas Patrick as well as redshirt sophomores Tanner Stone and Casey Blaser to be in the mix as replacements up front, while Johnell Barnes could slide in as a starting receiver for the departing Braxton. He had 15 receptions for 217 yards last fall. Issac Blakeney, who had 19 catches for 244 yards and four touchdowns in 2013, will also compete for the vacated starting spot. And while leading rusher Jela Duncan is suspended from school until spring 2015 at the earliest, the Blue Devils' rushing attack should remain productive with redshirt senior Josh Snead and junior Shaquille Powell. They combined for 998 yards last season, and redshirt freshman Joseph Ajeigbe should also provide help.

New blood up front: The defensive line needs to replace starting ends Kenny Anunike and Justin Foxx as well as starting tackle Sydney Sarmiento. The good news is that ends Dezmond Johnson (one sack in '13) and Jonathan Jones (three sacks) have some experience. A.J. Wolf and Carlos Wray will also try to push their way into the lineup. A strong pass rush will be needed for a secondary that will lose starting cornerbacks Ross Cockrell and Garett Patterson. However, sophomores Bryon Fields and Breon Borders received extensive playing time last year and should be solid as the expected new starters. But losing a two-time all-ACC pick in Cockrell is an obvious tough loss. Meanwhile, redshirt junior safety Jeremy Cash was second in the ACC in tackles (121) last year, and fellow safety DeVon Edwards had three interceptions.

The Blue Devils welcome back backup quarterback Thomas Sirk after he missed 2013 with a ruptured right Achilles tendon. But nose guard Jamal Bruce, defensive end Jamal Wallace and linebacker C.J. France are out for these drills.

Cutcliffe, who earned ACC and national coach of the year honors last fall, is entering his seventh season at Duke.

The program brought in one of its most talented recruiting classes in history on Wednesday, headlined by a pair of South Florida players in wide receiver Trevon Lee and dual-threat quarterback Nicodem Pierre.