Clemson begins spring practice on Wednesday led by star dual-threat quarterback Tajh Boyd, who elected to come back for his senior season.

1. Will the defense take the next step?

Swinney and coordinator Brent Venables are hoping that the defense that held LSU to 219 total yards in the Chick-fil-A Bowl win can consistently play well week after week next fall. If the Tigers want to claim a spot in a BCS game, the defense will have to do its part even if it is sometimes taken off the hook by a prolific offense. Stephone Anthony and Spencer Shuey are the leaders of a linebacker unit that is just getting better, while Malliciah Goodman's spot on the defensive line will looked to be filled by Vic Beasley, Corey Crawford and freshman early enrollee Ebenezer Ogundeko. However, can the secondary improve? Clemson was woeful at times against the pass, especially against N.C. State. Although, injuries to starting corners Darius Robinson and Bashaud Breeland hurt the cause. The Tigers' young defensive backs will be on the spot this spring, including Martin Jenkins, who was one of the top DBs in the Class of 2011 but was out for the 2012 season after undergoing hernia surgery.

2. Is McDowell an adequate replacement for Ellington? 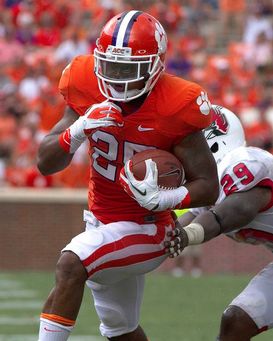 US PRESSWIRERoderick McDowell had 83 carries last season and should expect his workload to increase next fall.

With star running back Andre Ellington gone, it is finally Roderick McDowell's time to take the lead role in the backfield for the Tigers. The senior averaged over 5.0 yards per carry last season and will have the first chance to assume the No. 1 spot after getting double-digit carries in each of the final three ACC games in 2012. But Zac Brooks and D.J. Howard will also get reps as well before true freshmen Tyshon Dye and Wayne Gallman arrive in the summer. Brooks could emerge as the receiver threat that Ellington provided. Boyd will always be a threat on the ground, but Swinney and Co. can't afford to have him carry the rushing load. The staff is certainly counting on McDowell to be ready.

3. What if Boyd gets banged-up?

Like Johnny Manziel under Kevin Sumlin at Texas A&M, Tajh Boyd is so instrumental in making this Chad Morris operate smoothly. But what if Boyd gets hurt and has to miss a few plays here and there — or worse? The backup QB job will come down to sophomore Cole Stoudt and redshirt freshman Chad Kelly, who was a top recruit and someone that Morris foresaw running the offense in the future. Kelly is athletic and comes from a very good football background, as he is the nephew of former Buffalo Bills great Jim Kelly. The young signal-caller has said that he is going to train with quarterback coach George Whitfield in California in the break between spring practice sessions.

4. Will Watkins be dependable?

With DeAndre Hopkins moving onto the NFL after his spectacular junior season, which included school records of 82 catches, 1,405 yards and 18 touchdowns last fall, can the Tigers rely on Sammy Watkins to be the go-to No. 1 receiver he was expected to be in 2012? Off-the-field issues and injuries slowed him last year, and the coaching staff certainly is hoping that he becomes a more mature player and person. And that will be difficult if Watkins doesn't get any help from his fellow receivers to take pressure off of him. It would appear that Martavis Bryant, Germone Hopper and Charone Peake will get plenty of chances to emerge as a secondary option at receiver. Bryant averaged 30.5 yards per catch on 10 receptions last season, while Peake is considered by some to be the fastest player on the team and caught 25 passes for 172 yards in 2012.

5. Can the Tigers live up to expectations?

Florida State was the ACC team expected to do damage nationally the last two seasons. And while the Seminoles still have a lot of talent remaining despite losing EJ Manuel, Bjoern Werner and others to the NFL, Clemson is the ACC team that many expect to carry the banner of the conference this season because of Boyd. Can this team parlay its success against SEC power LSU in the bowl game and get back into the BCS mix?