Florida begins spring practice on Wednesday trying to improve offensively while keeping its stout defense playing at a high level.

Let's take a look at five questions facing the Gators leading up to their spring game on April 6.

1. Will Driskel continue to develop?

Quarterback Jeff Driskel won't be involved in a quarterback competition, as backup Jacoby Brissett is transferring to N.C. State. So Driskel will enter his second season as a starter with the coaching staff hoping he improves as a passer, both with his decision-making and mechanics. He'll get the majority of the spring reps, although the Gators will need to find a new backup between redshirt junior Tyler Murphy and redshirt freshman Skyler Mornhinweg, both of whom have no college experience. Driskel has struggled to stay healthy both in his freshman and sophomore campaigns, so durability is certainly a concern. But he did finish 2012 by completing over 63 percent of his passes and was second on the team in rushing with 413 yards. And he still has a lot of room for growth as he enters his second year in coordinator Brent Pease's offense. Driskel has the arm strength to make plays down the field, but he will need to develop rapport and timing with his young receivers.

2. Who will emerge as offensive playmakers? 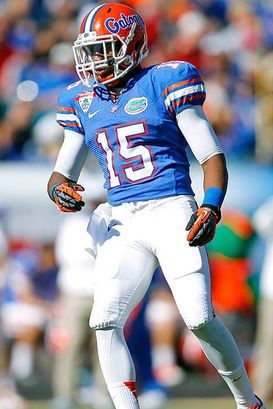 Loucheiz Purifoy will move from cornerback to receiver this spring.

Even if Driskel makes improvements in his own game, will he have any help on the offensive side of the ball? Workhorse running back Mike Gillislee is gone, though early enrollee Kelvin Taylor could emerge as an eventual No. 1 back. Sophomore Matt Jones and junior Mack Brown enter spring drills atop the depth chart in the backfield, though Taylor may just be too talented to keep off of the field for too long. And Trey Burton will continue to play halfback, fullback, slot receiver and quarterback out of the Wildcat formation. But what about the Gators' options at receiver? UF has lost its best receiving option in tight end Jordan Reed, so it appears that Will Muschamp's squad will have to rely on a lot of true freshmen to step up. Keep an eye on Demarcus Robinson, who was the lone receiver signee to enroll early. It is shocking that the Gators have not had a consistent go-to threat on the outside in three seasons. Robinson has good size and speed, but can he make an immediate impact? Another player to keep an eye on is Loucheiz Purifoy, who was a special teams ace and started at corner last season but will move to receiver this spring. He could be a big play waiting to happen, but can he be an efficient route runner? Muschamp said on Tuesday that Purifoy will still play corner in the fall but that he will be a part of the offensive package as well.

3. How will the offensive line shake out?

Muschamp continues to want to play a physical brand of football even with the need to improve in the passing game. So the offensive line will be under pressure to continue to open rushing lanes while protecting the QB. UF returns three starters up front, as center Jon Harrison, right guard Jon Halapio and right tackle Chaz Green are back. But Nebraska transfer Tyler Moore could take Green's job, and Maryland transfer Max Garcia could slide in at left guard. Meanwhile, D.J. Humphries could be a future stud at left tackle. Offensive line coach Tim Davis could do some shuffling on this unit as he looks to play the five best no matter the position.

4. Can the defense remain stout despite losing so much talent?

The Gators lose five of their top six tacklers, including tackle Sharrif Floyd and safety Matt Elam, who combined for 24 tackles for loss. But there is plenty of talent remaining in Gainesville for new defensive coordinator D.J. Durkin, who was formerly the team's linebackers coach and special teams coordinator. At cornerback, Marcus Roberson is a star, and Ronald Powell returns from an injury to lead a talented front seven that also includes soon-to-be sophomores Dante Fowler Jr. and Jonathan Bullard. If he is healthy, Powell will be the much-needed dominant pass rusher that the unit sorely needs.

5. Will there be a collective chip on this team's shoulders?

The Gators were embarassed by Louisville in the Sugar Bowl to close out last season. And they looked wretched during their loss to Georgia. There were times when this team had to win ugly to keep alive its BCS hopes. The defense should still be the backbone of this team, but can UF compete for a national title without being a consistent threat offensively? Not likely. It's asking a lot even if the defense once again is the strongest aspect of this squad.