Let's take a look at five questions facing the Volunteers leading up to their spring game on April 20 at Neyland Stadium.

1. Will the players buy into the new staff?

It may not have been the smoothest of coaching searches for athletic director Dave Hart, but he ultimately was able to land a head coach who has had success at Central Michigan and Cincinnati. Now, Butch Jones will try to win over critics who feel he was able to take advantage of Brian Kelly's leftovers at both of those stops. The Vols should embrace Jones with open arms after the rough years under Derek Dooley. The energy level seems to be high in Knoxville, so now it's a matter of the players and coaches getting a better feel for each other on the practice field and in the spring game to set the stage for preseason camp.

2. Who will replace Bray? 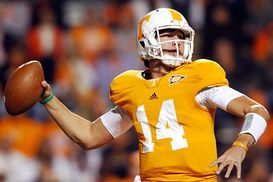 US PRESSWIREJustin Worley will battle for the starting quarterback job this spring at Tennessee.

With Tyler Bray leaving for the NFL, rising junior Justin Worley and redshirt freshman Nathan Peterman will battle for the starting job under center. Worley has the experience edge, but both signal-callers have a fresh slate with a new coaching staff in Knoxville. And Peterman was recruited by Jones and offensive coordinator Mike Bajakian at Cincinnati. Freshmen Joshua Dobbs and Riley Ferguson arrive on campus this summer, and Dobbs is considered an underrated prospect. But it's hard to imagine either freshman making too much of an impact early in Bajakian's offense.

3. Which receivers will step up?

Juniors Justin Hunter and Cordarrelle Patterson joined Bray in leaving early for the NFL, and Zach Rogers has graduated. So the Vols have a lot of inexperience at receiver. Soon-to-be sophomore Pig Howard will have a big chance to become the No. 1 target, while early enrollee Paul Harris is also being counted on to step in and contribute right away. Also keep an eye on Devrin Young, who will move from running back to slot receiver this spring. Drae Bowles and Jason Croom will also be given plenty of reps to make an impact at receiver.

4. How much change will take place on defense?

New coordinator John Jancek will try to put his stamp on that side of the ball this spring. He will be without linebacker Curt Maggitt and safety Jaylen Reeves-Maybin this spring, but Jancek will have his hands full with position changes. Brent Brewer is going from safety to linebacker, while linebacker Jacques Smith will get work at end. Keep an eye on redshirt freshman LaTroy Lewis, who is moving to defensive end from outside linebacker in the new 4-3 scheme. The Vols desperately need a better pass rush. Tennessee has depth issues up front, and Jones will be counting on Daniel McCullers and Maurice Couch on the inside. The secondary is a concern as well, although getting back the services of safety Brian Randolph from a torn ACL will be a nice boost. And JUCO cornerback Riyahd Jones has a chance to start immediately.

5. How good is the offensive line?

With the Vols breaking in a new starter under center and with issues at receiver, Jones has to feel confident about an offensive line that has four returning starters who could be playing on Sundays soon. Even the backups have extensive playing time under their belts. Only Dallas Thomas’ left guard spot is open.