Wisconsin began spring practice on Saturday under new head coach Gary Andersen, who took over the program when Bret Bielema left for Arkansas.

Let's take a look at five questions facing the Badgers leading up to their spring game on April 20.

1. Will the players and coaches be on the same page?

Bielema shook up Madison when he left to take the head job at Arkansas. Athletic director Barry Alvarez, however, was able to bring in Utah State's Andersen, who was able to have success as the third wheel in a state that does not produce a lot of great talent (the Aggies had been after-thoughts in the state behind BYU and Utah). But while Andersen is an accomplished leader and has brought a strong staff to Madison, this program is definitely going through the most change it has in a very long time. The style of play isn't expected to be altered too much, according to Andersen, but expect the new head man to add some new elements to the offense as well.

2. Who will be the starting quarterback? 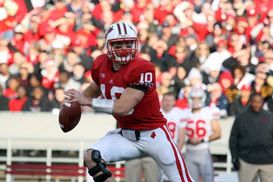 US PRESSWIRECurt Phillips has a lot of competition for the starting QB job in Madison.

Andersen has options under center, although none of them quite bring the athleticism of dual-threat quarterback Chuckie Keeton, who starred for Andersen at Utah State. Danny O'Brien, who transferred from Maryland before last season, lost his starting job last year to Joel Stave and will need a strong offseason to impress the new staff. When Stave was injured late in the season, Curt Phillips stepped in. So the Badgers have three experienced signal-callers along with redshirt freshman Bart Houston. The interesting player to watch in the fall, though, is junior college transfer Tanner McEvoy. He is the big dual-threat quarterback who reminds some scouts of Collin Klein. Overall, all of the QBs competing for the starting job are at square one under new coordinator Andy Ludwig, who has overseen both spread and pro-style attacks in his career.

3. Will the ground game be okay without Ball?

Wisconsin is one of the few programs in America that can seemingly plug in a new running back and get similar production year after year. Even with some potential new wrinkles on offense, this will remain a run-first operation. And despite losing Montee Ball, the Badgers still have James White and Melvin Gordon, who combined to rush for more than 1,400 yards and 15 touchdowns last season. With their touches heavily increasing for those two, those numbers will skyrocket. While White may be the No. 1 back, Gordon averaged 10 yards per carry last season and is considered the more explosive player. He rushed for 216 yards and a touchdown on nine carries in the Badgers’ 70-31 victory over Nebraska in the Big Ten championship game.

4. How much of a concern is the secondary?

The Badgers were strong against the pass last season, and they only lost four starters from last year's squad. However, the secondary was hit hard, with three of the four players in the defensive backfield gone, including starting cornerbacks Devin Smith and Marcus Cromartie. The hope is that junior college transfer Donnell Vercher could make an instant impact and step in right away. Darius Hillary and Peniel Jean will also battle for a starting job. The major issue for the Badgers is the move to man coverage. At safety, Michael Trotter and Michael Caputo will try to enter preseason camp atop the depth chart.

5. Who will complement Abbrederis at receiver?

Outside of Jared Abbrederis, who had team bests of 49 catches for 837 yards with five touchdowns, who will emerge as a legitimate weapon at receiver for whoever wins the starting job at quarterback? Speedy yet diminutive Kenzel Doe is the most intriguing and could cause a lot of problems in space for opposing defenses. Jordan Fredrick flashed some talent last fall but was inconsistent. Fellow sophomores Reggie Love and A.J. Jordan will also compete for reps as well as junior Chase Hammond, who had flashes last season, and oft-injured senior Jeff Duckworth.