Georgia Tech opens spring practice on Monday in preparation for its spring game on April 19 at Bobby Dodd Stadium.

Let's take a look at some of the issues surrounding Paul Johnson's Yellow Jackets as they try to build off of their win over USC in the Sun Bowl, which was their first bowl victory in the past eight tries. 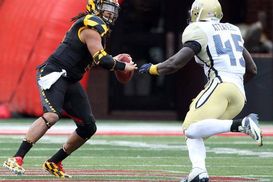 US PRESSWIREJeremiah Attaochu is part of a defensive line that will be more aggressive and turned loose under a new DC.

Getting acclimated with Roof: Ted Roof was hired from Penn State after one season in State College, so he'll devote the spring to teaching the terminology of his scheme and getting to know his defensive players. Roof became Johnson’s third full-time defensive coordinator and will oversee a unit that improved after former DC Al Groh was dismissed last year midseason. Jeremiah Attaochu will move from outside linebacker to defensive end, and he'll be part of a defensive line that will be more aggressive and turned loose under its new DC. Attaochu excelled at end in the second half of last season.

New wrinkles on offense?: Johnson mentioned earlier this offseason that he wanted to "broaden" his triple-option attack, noting that he planned to break down video of teams that ran option plays out of the shotgun. With the success of quarterbacks such as Robert Griffin III and Colin Kaepernick at the pro level, offenses are continuing to be tweaked throughout all levels of football. Vad Lee enters spring as the new No. 1 quarterback after serving as the backup last season, and the staff is excited about his future. It will be interesting to see how the coaches utilize his various attributes. Also keep an eye on redshirt freshman signal-caller Justin Thomas, who could be used in different packages as well or even push Lee for the starting job with a strong offseason because Johnson is enamored with his talents. GT also returns star B-back David Sims, who rushed for over 600 yards on 4.5 yards per carry with four scores in 2012. Four starters return on the offensive line, and that's good news for a rushing attack that finished No. 4 in the country at 311.2 yards per game. The biggest chore, though, is replacing all-ACC right guard Omoregie Uzzi and A-back Orwin Smith. Former quarterback Synjyn Days will try to steal some carries from Robbie Godhigh at A-back.

Lots of sidelined starters: Johnson said last week that center Jay Finch, linebackers Jabari Hunt-Days and Brandon Watts and safety Isaiah Johnson will be out for spring drills. All four are key starters for the Jackets, and Finch will lose time working on more use of the shotgun. Safety Fred Holton, who missed last season with a foot injury, will not be a full participant either. And A-back Tony Zenon and receivers Anthony Autry and Travin Henry will also be on the sideline. While it's not an ideal situation, Johnson said the injuries will give younger players a chance to get more reps and for the team to develop depth.

— Jemea Thomas is moving back to cornerback after switching to safety in 2012. He could take Rod Sweeting's starting spot.

— The status of B-back Charles Perkins, who is returning from a season-ending shoulder injury in early September, is unclear.