Georgia Tech began spring practice on Monday as the program looks to rebound from a 7-6 season in 2013.

Let's take a look at some of the issues facing the Yellow Jackets as they prepare for their spring game on April 18 at Bobby Dodd Stadium. 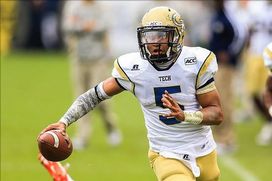 Justin Thomas has a chance to assert himself as the No. 1 at GT with Vad Lee gone.

No more Lee: Justin Thomas sits atop the depth chart at quarterback after Vad Lee transferred to James Madison. Thomas played in 10 games in 2013 after Lee's up and down play, but can Thomas bring more consistency to the position and protect the football? GT was twelth in the ACC in turnover margin last fall, so that will be a point of emphasis this spring for Thomas and the other three signal-callers fighting for the starting job. Head coach Paul Johnson said that Thomas is the player to beat in the QB competition for the right to run GT's spread-option offense. He only completed 9 of 17 passes for 131 yards with one touchdown and two interceptions as a freshman last fall, but the 5-11, 179-pounder has good speed and racked up 234 yards on the ground for an over 7.0 yards per carry average. Becoming a more vocal leader is a priority for Thomas this spring.

Replacing the top rushers: Johnson must identify new options on the ground after the team lost its top three rushers: Lee, B-back David Sims and A-back Robert Godhigh. GT also loses three starters from the offensive line: tackles Ray Beno and Will Jackson as well as center Jay Finch. However, all-ACC guard Shaq Mason returns. In terms of the rushers (besides the expected production from Thomas), keep an eye on freshman Travis Custis, who sat out last season dealing with NCAA eligibility issues. In high school, Custis broke a lot of the rushing records set by former Georgia Tech standout Tashard Choice. Zach Laskey will also be in the mix as Tech's leading returning rusher.

Enough across the D-Line?: In addition to the three starters the Jackets lose up front on offense, the team must also replace three starters along the defensive line, including all-ACC end Jeremiah Attaochu. The type of production Attaochu gave the team over the last two seasons (22.5 sacks) will be very difficult to replace. Sophomores Tyler Stargel and Patrick Gamble have the most experience, but can they replicate the explosiveness that Attaochu provided? One non-defensive lineman to keep an eye on is linebacker Tyler Marcordes, who excelled on special teams last fall. He had 2.5 tackles for loss, two interceptions and a forced fumble playing behind Brandon Watts. Fellow linebackers Quayshawn Nealy, Jabari Hunt-Days and P.J. Davis help comprise the strength of the 'D. But there's no question that defensive line coach Mike Pelton has work to do as he tries to identify new leaders up front besides nose tackke Adam Gotsis.

The Yellow Jackets also have to replace two starters in the secondary. Cornerback D.J. White finished the season very strong in the bowl game against Ole Miss, and he'll be joined by Lynn Griffin and Jamal Golden fighting it out at one of the corner spots.