Let's take a look at some of the issues facing the Wildcats as they get set for their spring game on April 26.

Replacing the old reliable: John Hubert has exhausted his eligibility in Manhattan after being a three-year starter at tailback. Hard-working rising senior DeMarcus Robinson appears to have the best chance to earn the No. 1 job, but he needs to finally live up to his enormous potential after being the gem of his class. With Hubert out of the way, the small but compact runner (Darren Sproles Lite) will now have his chance. Sophomore Jarvis Leverett will also be in the mix for carries this spring before Dalvin Warmack arrives on campus. Warmack can make an immediate impact, especially if he can pick up pass protection quickly. 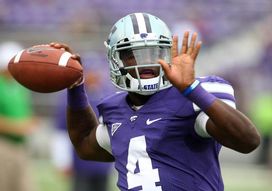 US PRESSWIREDaniel Sams may be more valuable to the Wildcats at receiver.

Where will Daniel Sams line up?: With senior-to-be Jake Waters eventually emerging as the leader at quarterback last season, Sams was debating switching positions before the team's Buffalo Wild Wings Bowl game against Michigan. So there's a chance that Sams will be lining up at receiver in the fall. But keep in mind that he played in all 13 games at quarterback last year and rushed for over 800 yards. However, his play at the position dwindled as the season went along. It will be interesting to see if Sams takes a certain amount of reps at receiver this spring and possibly plays both positions or if he makes the full-time switch. K-State is intrigued by redshirt freshman signal-caller Jesse Ertz, so the 'Cats may want Sams to permanently switch to receiver. No matter what happens, he needs time on the field after being responsible for 15 touchdowns in 2013.

The Big 12's best player?: Whether or not Sams moves to receiver, K-State has perhaps the conference's best offensive player at the position in Tyler Lockett, who averaged nearly 7 receptions and over 105 receiving yards per game to lead the league last year. He's just flat-out electric. Despite missing two games because of injury, he finished with 1,262 receiving yards on 81 receptions last season (including 278 receiving yards and three touchdowns against Oklahoma and three more scores against Michigan). But who will replace Tramaine Thompson and alleviate just a little bit of the pressure and open up the field a little bit more for Lockett? JUCO transfer Andre Davis is on campus and proved at the junior college level that he can stretch the field vertically. He will get plenty of looks versus single coverage while the defense is keyed on Lockett.

Tre Walker and Blake Slaughter are gone at linebacker, so younger players will have to step up and play key roles on this Wildcats defense. Mike Moore and Trent Tanking should be ready to step in and contribute as new starters.

The Wildcats lost both starting tackles from the offensive line, so keep an eye on JUCO transfers Luke Hayes and Aaron Bennett, who redshirted last year, as well as fellow JUCO transfer A.J. Allen.

Speaking of junior-college transfers, Snyder has done a nice job filling needs on defense with tackle Terrell Clinkscales, outside linebacker D'Vonta Derricott and cornerback Danzel McDaniel. Nothing is guaranteed when it comes to JUCO players, but we have seen Snyder's magic touch work before with JUCO transfers.

All-Big 12 safety Ty Zimmerman is gone, but Dante Barnett was third on the team with 75 tackles and led the Wildcats with four interceptions last fall.