Let's take a look at some of the issues facing Dan Mullen and the Bulldogs this spring.

Getting acclimated: The Bulldogs have three new assistants that players will be getting accustomed to this spring. Geoff Collins is the new defensive coordinator after serving as co-DC the last two seasons. Collins will remain the linebackers coach as well, but he'll have full-time DC duties with Chris Wilson leaving to coach the defensive line at Georgia. Scott Sallach is the tight ends coach once again after Tim Brewster was brought in to coach that unit before leaving for Florida State. Billy Gonzales is the new receivers coach, while David Turner and Deshea Townsend have arrived in Starkville to coach the defensive line and cornerbacks, respectively. Turner was the Bulldogs’ defensive line coach from 2007-09 and Kentucky’s defensive line coach for the last three years, while Townsend was a coach on the staff of the NFL's Arizona Cardinals for the last two seasons. 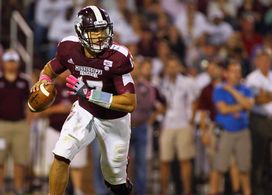 US PRESSWIRETyler Russell set school marks with 2,897 passing yards and 24 touchdowns in 2012.

Russell is back: Tyler Russell is back under center for the Bulldogs, and he'll be looking to put behind a dreadful postseason performance against Northwestern in the Gator Bowl. However, overall he had a very good campaign, setting school marks with 2,897 passing yards and 24 touchdown passes. But how will he cope with having such a green receiving corps? It's a good thing MSU still has running back LaDarius Perkins, who rushed for 1,024 yards in 2012. He'll be running behind an offensive line that returns four starters, including All-SEC guard Gabe Jackson.

Who will catch the football?: The Bulldogs lost four veteran receivers, including Chad Bumphis, who led the SEC with 12 touchdown catches in 2012. Juniors Robert Johnson and Jameon Lewis will be counted on to step in and produce along with 6-4 sophomore Joe Morrow and junior-college transfer Jeremey Chappelle. Johnson is the most experienced of the bunch, but he only caught 17 passes last season. The Bulldogs will also get some help this summer when freshmen Fred Ross and De’Runnya Wilson arrive. So there will be plenty of opportunities for each receiver to emerge.

Defensive concerns: Star cornerback Johnthan Banks and his partner-in-crime Darius Slay depart along with safety Corey Broomfield. Banks was one of the best DBs in the nation last season, so it's almost impossible to replace his star power. Taveze Calhoun is on the mend, so he will be avoiding contact this spring, but junior-college transfer Justin Cox is listed as one of the starters on the depth chart at corner. And keep an eye on junior Jamerson Love, who has a high ceiling. Meanwhile, the Bulldogs also need to find some consistent pass rushers, as they recorded just 18 sacks in 2012. Look for Collins to try anything and everything to produce pressure and big plays for his unit. A lot will be expected of end Preston Smith, a junior who led the team with 4.5 sacks last season as a reserve. A pair of sophomore tackles, Nick James and Quay Evans, also are expected to make a jump from their debut campaigns.