Let's take a look at some of the issues facing the Nittany Lions as they prepare for their spring game on April 12 at Beaver Stadium. 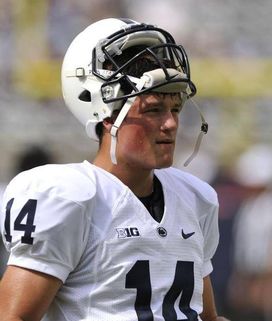 Christian Hackenberg was named the Big Ten freshman of the year in 2013.

The centerpiece is in place: Franklin inherits one of the best young signal-callers in the nation, as sophomore quarterback Christian Hackenberg started every game in 2013 and passed for 2,955 yards and 20 touchdowns en route to being named the Big Ten freshman of the year. He also broke 11 PSU freshman records. But the major question is how his progression as a signal-caller will fare without O'Brien, who has been known for his strong work with QBs throughout his coaching career. Franklin, quarterbacks coach Ricky Rahne and offensive coordinator John Donovan are now in charge of helping Hackenberg become a more consistent player and limit the types of mistakes that plagued him in games against Ohio State and Kent State last year, in particular. The good news is that Hackenberg threw only two interceptions over the last five games of 2013. And, of course, he closed strong in the season finale against Wisconsin by passing for 339 yards and four touchdowns.

Depth at running back: The Nittany Lions have a very talented backfield to help out Hackenberg, as Bill Belton, Zach Zwinak and Akeel Lynch return at tailback. Belton, who is very good after initial contact in addition to being a very good pass-catcher, finished with 803 yards and five touchdowns on the ground, while Zwinak fell just 11 yards shy of 1,000 on his way to 12 scores. The bruiser, however, needs to take better care of the football after dealing with fumbling issues. Meanwhile, Lynch will try to steal carries from both backs with a strong offseason.

Finding a new No. 1 receiver: Franklin must identify a top weapon at wide receiver with All-American Allen Robinson gone. Robinson recorded 97 catches for 1,432 yards last fall, so that production won't be replaced by one player. Physical receiver Geno Lewis is the best bet to step up out of the returning players after nothcing 18 catches for 234 yards and three touchdowns (two versus Wisconsin in the season finale). Richy Anderson can be a valuable weapon in the slot, while 6-3 Matt Zanellato will try to earn more reps in 2014. De’Andre Thompkins, however, is the true wild card. He enrolled early and has elite speed. Along with Saeed Blacknall and Chris Godwin, who will arrive in the summer, the PSU receiving corps could be very young but extremely dangerous when the team opens the season against Central Florida in the Croke Park Classic in Dublin, Ireland.

How does the defense stack up?: Finding replacements for tackle DaQuan Jones and linebacker Glenn Carson will be tough, but the defense returns a lot of talent. Returning to the unit are standouts such as linebacker Mike Hull, cornerback Jordan Lucas, end C.J. Olaniyan and safety Adrian Amos. It's unclear just what type of defense coordinator Bob Shoop will run, but expect it to show multiple looks depending on how the personnel shakes out through spring, summer and preseason camp. The veterans of the defense are used to changing coordinators, as Shoop will be the team's fourth DC in as many seasons. Keep an eye on outside linbebacker Brandon Bell, who played very well toward the end of 2013, as well Ben Kline, who was out all of last season with an injury but saw playing time in 2012. Meanwhile, Olaniyan (five sacks and three forced fumbles in 2013) and former 2012 Big Ten freshman of the year Deion Barnes could be stellar at end.

The Nittany Lions have nice depth at tight end, where Adam Breneman, Jesse James and Kyle Carter are back after combining for 58 catches and 741 yards with seven scores last season.

Other than returning starter Donovan Smith, PSU does not have any experienced offensive tackles on the team. The program can ill afford injuries at any position due to scholarship sanctions, but it may be most true at OT, where incoming recruits Noah Beh, Brendan Brosnan and Chance Sorrell won’t arrive until preseason camp.