Let's take a look at some of the issues facing the Gamecocks as they prepare for their spring game on April 12. 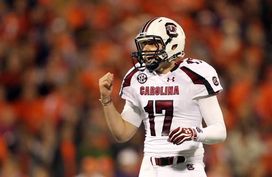 The grit is gone: Most every college football fan would have to admit that he or she will miss watching Johnny Manziel on Saturday afternoons because he was one of a kind. But I'll personally miss watching Connor Shaw playing quarterback because you wouldn't have found a tougher signal-caller in the nation in 2013. Shaw went 27-5 as the Gamecocks' starting quarterback during his career in Columbia, and no one will forget his incredible fourth-quarter effort last season in a comeback win at Missouri. Fifth-year senior Dylan Thompson now gets his shot to be the every-down QB after getting onto the field in spurts the last few years, and there's no question that he has SEC-level talent and experience. But he doesn't have Shaw's moxie. How much will the offense miss that unquantifiable quality? Thompson also doesn't have Shaw's wheels, but he does have the much better arm as well as one of the best offensive lines in the SEC.

Old and new offensive weapons: Thompson loses top receiver Bruce Ellington, who departed early for the NFL. But junior Shaq Roland is primed for a huge year if he can stay on the field, while Pharoh Cooper should get many opportunities with the ball in his hands after shining as a true freshman. Look for him to be a real dangerous weapon as a slot guy. Damiere Byrd also returns at receiver, although he will miss spring drills with a knee injury suffered last December. In the backfield, the Gamecocks have very good depth. And it starts with Mike Davis, who rushed for 1,183 yards last fall and might have a monster year. Brandon Wilds also returns, while redshirt freshman David Williams could be a home-run threat any time he touches the ball.

Corner concerns: The Gamecocks are very inexperienced at cornerback, and they only have four scholarship corners on the spring roster. Redshirt sophomore Rico McWilliams has started two games and leads the way, but will the highly rated corners that will arrive this summer (such as Wesley Green and Chris Lammons) develop enough to be quality SEC DBs this fall? Adding to the concern is whether the team will be able to generate a strong enough pass rush without Jadeveon Clowney, Chaz Sutton and Kelcy Quarles. Redshirt sophomores Darius English and Gerald Dixon have a chance off the edge to turn defensive coordinator Lorenzo Ward's eyes this spring.

JUCO transfer DT Abu Lamin has a chance to earn immediate playing time in the middle of the Gamecocks' defense. The 6-4, 295-pounder has good athleticism, so he could emerge as a disruptive run-stuffer.

Fullback Connor McLaurin will miss spring drills while he recovers from his broken left fibula. Meanwhile, cornerback Ali Groves will be limited after undergoing shoulder surgery.