Stanford begins spring practice on Monday following an 11-3 season that ended with a Rose Bowl berth for the second consecutive season.

Let's take a look at some of the issues facing David Shaw's two-time defending Pac-12 North division champion Cardinal as they prepare for their spring game on April 12.

Next in line: Who is ready to step in at running back following the losses of Tyler Gaffney and Anthony Wilkerson, who combined for 2,062 rushing yards in 2013? Coordinator Mike Bloomgren's offense returns Barry J. Sanders, Remound Wright and Ricky Seale, and the Cardinal are used to employing multiple backs. The team also will eventually welcome freshmen Christian McCaffrey and Isaiah Brandt-Sims. Sanders is a weapon as a pass-catcher out of the backfield, while neither Wright nor Seale are traditional Cardinal power backs. No matter who gets the most carries, the Cardinal have had a 1,000-yard rusher for six consecutive seasons. That streak could be in danger, though, because the three top backs have similar skill sets, so it will be interesting if a true No. 1 emerges. 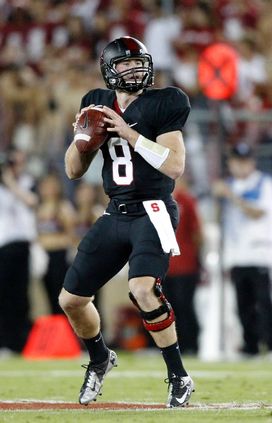 US PRESSWIREKevin Hogan is expected to take a big jump in his development this fall.

Continued development of Hogan: The last time we saw Kevin Hogan, he was going up against Michigan State's nasty defense. And while his numbers weren't great, he showed that he throws a very nice deep ball and can be very accurate on some tough throws. He also continues to improve mechanically, so the expectations will be very high for him in 2014. With the possibility that the Cardinal may not have the same exact power-run game as we've seen in the past, we could see more of Hogan's athleticism and run skills on the read-option this upcoming season. Stanford hopes that Hogan gets a chance to show his strength as a pocket-passer, though, with the team getting hit by personnel losses up front. Guards David Yankey and Kevin Danser, tackle Cameron Fleming and center Khalil Wilkes are all gone, but Shaw and his staff have brought in elite talent up front in the last couple of recruiting cycles, such as Andrus Peat, Kyle Murphy and Josh Garnett. The question is how quickly the new faces can acclimate themselves to one another.

Replacing the defensive stalwarts: The team's dominant front seven will have to replace several standout players, including end Ben Gardner and linebackers Trent Murphy and Shayne Skov. Safety Ed Reynolds is also moving on. It's bad enough defensive coordinator Derek Mason is gone. He was replaced by Lance Anderson. While the unit is familiar with Anderson because he has been on The Farm since 2007, getting the new starters to play with the intensity that the departing players had will be a chore. But there are some key familiar faces back, including Henry Anderson, who was honorable mention all-Pac-12 last season. Aziz Shittu's production should increase at end, and David Parry is very solid at tackle. Blake Lueders and Luke Kaumatule will also get extended time along the line. At linebacker, leadership is more a concern than talent. A.J. Tarpley and Kevin Anderson must emerge and become more vocal at the second level.

Not only did the Cardinal lose Mason to the head-coaching position at Vanderbilt, but David Kotulski went to Nashville as well. And Mike Sanford left to become the offensive coordinator at Boise State. Peter Hansen replaces Kotulski as inside linebackers coach, while Lance Taylor will coach the running backs.

Possible players to step in for Reynolds at safety include Kodi Whitfield, Dallas Lloyd, Zach Hoffpauir and Kyle Olugbode.