Let's take a look at some of the issues facing the young Vols (14 early enrollees are in camp) as they prepare for their spring game on April 12 at Neyland Stadium.

Rebuilding up front: The Vols had veteran offensive and defensive lines last season, which will not be the case in 2014. All five starters on the O-Line are gone, as well as all four spots on the D-Line. So which players are in line to replace stalwarts Antonio Richardson, Ja’Wuan James and Daniel McCullers? Mack Crowder is the lone player with starting experience (one start), and he'll be joined by Marcus Jackson and Kyler Kerbyson as the most likely to earn starting nods on the O-Line. JUCO early enrollee Dontavius Blair will also be in the mix and could start right away at left tackle; true freshman Coleman Thomas could win the other tackle spot. Defensively, Jordan Williams and Corey Vereen are expected to emerge along the line and be joined by Jaylen Miller and Trevarris Saulsberry when they are healthy. A lot of help will also arrive this summer when freshmen such as Dewayne Hendrix, Michael Sawyers and Derek Barnett land in Knoxville. Linebacker Jalen Reeves-Maybin is also an intriguing pass-rusher, and he could join Curt Maggitt and A.J. Johnson to form a real nice linebacker corps. The Vols had just 18 sacks last year, so more production is needed. Maggitt missed all of last season with an ACL injury, and he is the most talented defender on the team. 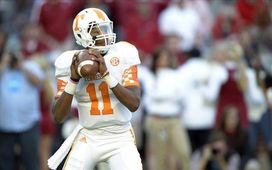 Josh Dobbs will try to emerge as the leader in the Vols' QB race.

The battle under center: The big question at Vols camp for Jones and offensive coordinator Mike Bajakian is who will emerge as the starter at quarterback, where Josh Dobbs and redshirt freshman Riley Ferguson will battle Justin Worley and Nathan Peterman. Dobbs played a bit as a true freshman last year, but Ferguson is intriguing and is the best pure passer of the bunch. Dobbs brings athleticism to the position that the Vols have not seen in a long time, and he also has very good arm strength. Worley is the most experienced but has seemingly reached his peak at the position, while Peterman has an uphill battle. The race won't be decided until the fall, but Dobbs and Ferguson could emerge as the leaders after camp.

Will offensive playmakers emerge?: With Pig Howard, Drae Bowles and Brendan Downs out of spring drills (and Howard's future in doubt with off-the-field matters), expect plenty of reps for young offensive players. Josh Malone is expected to be a big part of the offense at receiver, while Jalen Hurd will try to earn reps at running back. He may be eased into the rotation, as the Vols still have Marlin Lane. Meanwhile, JUCO receiver Von Pearson will also look to make an immediate impact and help improve the 102nd-ranked total offense from 2013.

Saulsberry, Bowles and Downs will be joined by tight end A.J. Branisel and safety Brian Randolph as players who will sit out spring drills while they recover from injuries.

Sophomore Jalen Reeves-Maybin has made the permanent move from safety to weakside linebacker.