UCLA opened spring practice on Tuesday in preparation for its spring game at the Rose Bowl on April 27.

Let's take a look at some of the issues surrounding Jim L. Mora's Bruins as they try to build off of their 9-win campaign in Mora's first season in Westwood, where the team won its most games since 2005 despite finishing the season on a three-game losing streak.

Finding Franklin's replacement: Johnathan Franklin rushed for a school-record 1,734 yards and averaged over 6.0 yards per carry on his way to 13 touchdowns as the Bruins were revived in Mora's first season. The versatile running back also had over 30 catches, establishing himself as one of the best pass-catching tailbacks in the country. But the Bruins will have to find a replacement for the Doak Walker Award finalist and the program's all-time leading rusher, and the hope is that star dual-threat quarterback Brett Hundley gets help on the ground from a committee led by senior Damien Thigpen, who is coming back from a knee injury, as well as sophomore Steven Manfro and junior Jordon James. But none are every-down type of backs. That's why redshirt freshman Paul Perkins, incoming freshman Craig Lee (if he is able to get academically eligible) and former star recruit Malcolm Jones, who has returned to the team as a senior walk-on, will also be competing for carries in coordinator Noel Mazzone's offensive scheme. 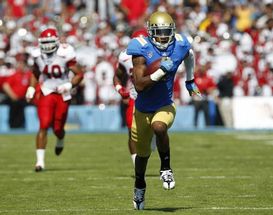 US PRESSWIREShaquelle Evans is the most experienced member of the UCLA receiver corps.

Who will Hundley find through the air?: Joseph Fauria was one of the best tight ends and one of the most overlooked playmakers in the country last season. And that's a position that will be tough for the Bruins to fill, especially in the red zone. So look for most of the production in the passing game to come from the receiver spot. Senior Shaquelle Evans is the most experienced member of that corps, but sophomores such as converted quarterback Devin Fuller, Devin Lucien and Jordan Payton are being counted on to emerge. Also keep an eye on freshman Eldridge Massington, an early enrollee speedster.

Secondary concerns: UCLA lost both of its starting cornerbacks as well as strong safety Tevin McDonald, who was recently booted from the team. So the lone returning starter in the defensive backfield is free safety Randall Goforth. The battle for the open cornerback gigs will center on sophomores Anthony Jefferson and Marcus Rios along with redshirt freshman Ishmael Adams, while junior Dietrich Riley and senior Brandon Sermons will likely battle for the other safety spot. Also keep in mind that the competition in the defensive backfield really will heat up in the fall when the Bruins welcome several intriguing true freshmen.

— Who will be Brett Hundley's backup? The redshirt sophomore who set a UCLA single-season mark for total offense in 2012 must stay healthy for the Bruins because there is no experience behind him. Redshirt freshmen T.J. Millweard and Jerry Neuheisel are the top backup options, but neither bring the explosiveness like Hundley.

— The Bruins will be looking to win their third straight Pac-12 South title in 2013, which is quite an accomplishment in spite of the weak division in 2011. The biggest reason why the Bruins are on the right path currently, however, is because Mora has instilled a toughness that had been severely lacking in Westwood. It will be interesting to see if that toughness carries over to some of the younger players.

— While UCLA returns four starters on the offensive line, guard Xavier Su'a-Filo might be the only one whose starting spot is locked up. There is plenty of competition up front.