Wisconsin began spring practice on Wednesday coming off of a 9-4 season under Gary Andersen in his debut season in Madison.

Let's take a look at some of the issues facing the Badgers as they prepare for their spring game on April 12.

Who will be under center?: Joel Stave has some work to do in order to remain the starting quarterback in Madison, and he'll actually be a bit behind when he finally makes it onto the field this spring. The incumbent hurt his right shoulder in the Capital One Bowl, so his work will be limited early in camp. Consistency was an issue for Stave in 2013, and he didn't make enough plays down the field when the running game was shut down. But he has started 19 games over the past two seasons, including all 13 last year, and Andersen has said that it is his spot to lose. He passed for 2,494 yards and 22 touchdowns while completing 61.9 percent of his throws in '13. But he also had 13 interceptions. Former JUCO transfer Tanner McEvoy has moved back to quarterback from safety, and Andersen has always loved his dual-threat signal-callers. That's why a lot of Badger fans are anxious to see early enrollee freshman D.J. Gillins and the athleticism that he brings to the position. But keep an eye on Bart Houston, who has a quick release and a strong arm. There's no doubt that offensive coordinator and quarterbacks coach Andy Ludwig will push the envelope with all of his QBs this offseason to determine who is the best fit to start the opener.

A re-tooled front seven: The strength of the Wisconsin defense last season was its front seven, which will not be the case in 2014 because of the departures of six starters, including stud linebacker Chris Borland. The staff does have a nice returning piece, though, in nose guard Warren Herring, who had four sacks and six tackles for loss as a reserve last fall. End Konrad Zagzebski also brings solid experience and 19 tackles from last season, while Derek Landisch and Joe Schobert should be solid at linebacker as well as Michael Caputo, who is making the permanent move to outside linebacker from safety. But developing depth is of the utmost concern, so young players such as ends Chikwe Obasih (a redshirt last season) and Jake Keefer (had a season-ending knee injury in August) as well as outside linebackers Leon Jacobs and Alec James have a chance to emerge as weekly contributors in coordinator Dave Aranda's 3-4 scheme. 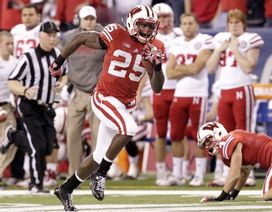 Melvin Gordon bypassed the NFL for one more season in Madison.

The expected strong run game: The Wisconsin run game will remain very productive, as always, with Melvin Gordon, Corey Clement and Jeff Lewis returning to the backfield. Clement is a great young talent, and he recorded 547 yards and seven touchdowns in limited action on the ground last fall. But Gordon likely will carry a heavier load with James White gone. Gordon ran for 1,600 yards and 12 touchdowns last year. However, Andersen has to be concerned about depth along the offensive line this spring. Centers Dallas Lewallen and Dan Voltz remain shelved while they rehab injuries, while fellow lineman Jaden Gault remains sidelined after undergoing minor knee surgery. The team only lost one starter from last year, and Tyler Marz and Rob Havenstein should be solid at tackle, but developing younger players while not getting banged-up will be crucial this spring.

Who will catch the ball?: No matter who wins the starting QB job, the Badgers will need to find a true No. 1 wide receiver to step in for Jared Abbrederis, who had twice as many receptions as any Badger player last fall. Jordan Fredrick, Alex Erickson and Kenzel Doe are the top returning receivers, but Reggie Love, Robert Wheelwright and Jazz Peavy all have a chance to crack the rotation with strong offseasons. Love and Peavy redshirted last season, while Wheelwright is looking to be more consistent. The Badgers even lost three senior tight ends, including Jacob Pedersen, so a lot is expected of rising senior Sam Arneson. If Gillins does not win the QB job and is not redshirted, it will be interesting to see if Andersen and his offensive coaches toy with the idea of getting him some reps at receiver at some point in fall camp.