Stacking up the Pac-10: Wide receivers

While NFP director of college scouting Wes Bunting provides you with everything you need to know about future NFL prospects, we can’t forget about the productive players who help their schools on the field every Saturday but may not be made for the pro game. With that in mind, let’s take a look at the wide receiver units — plus feature tight ends — in the Pac-10 entering the 2010 season.

Washington: Jermaine Kearse is the class of a receiving corps that didn’t let quarterback Jake Locker down very often last season. Kearse, Devin Aguilar and James Johnson combined for 131 catches, 1,881 yards and 16 touchdowns in ‘09. Good luck to all the Pac-10 defenses challenged with defending that trio, as all three return in 2010. The 6-2, 205-pound Kearse was a second-team all-conference selection, Aguilar ranked seventh in the league in receiving yards per game and Johnson likely will see his numbers take a step up following a strong true freshman campaign. This is indeed the strongest receiving corps in the Pac-10.

TE: Kavario Middleton was booted off the team after catching 26 passes last year, but he was being challenged for the starting job by Chris Izbicki anyway. Izbicki had a good spring, but he only caught three passes for 7 yards in ’09. Depth is now a concern. 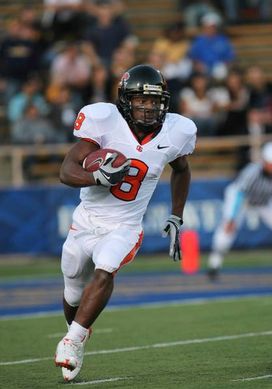 ICONJames Rodgers racked up 91 catches for 1,034 yards and nine TDs for the Beavers in '09.

Oregon State: James Rodgers is the stud of the Pac-10, and it’s likely that he will be snagged in the first round of next April’s draft. In ’09, the 5-7, 185-pound junior led the Beavers with staggering numbers — 91 catches for 1,034 yards and nine TDs. Not only was he a beast catching the football, but he’s a pretty good blocker and was a factor in the return game. He’s a guy the defense must be aware of at all times. But who can take some of the pressure off of Rodgers this fall? All eyes will be on Darrell Catchings, Markus Wheaton and Jordan Bishop, who will be fighting to complement the Beavers’ stud wideout and help out new quarterback Ryan Katz. The trio gives the receiving corps nice depth, but they only combined for 25 receptions last year. Catchings, however, was injured.

TE: H-back Joe Halahuni caught 35 passes for 486 yards and three TDs in ’09 and will remain a nice option as Katz gets acclimated to major college football. Senior Brady Camp is a solid blocker who has started 18 games in his career.

UCLA: The Bruins have a very good, yet underrated, junior receiver duo in the form of Taylor Embree and Nelson Rosario. The two combined for 87 catches, 1,331 yards and four scores in ’09. Junior Antwon Moutra, sophomore Randall Carroll and redshirt freshman Ricky Marvray will look to continue to develop this fall in hopes of cracking the rotation. Jerry Johnson, a 6-4 sophomore, looks to deliver on the high expectations bestowed upon him, and keep an eye on junior receiver/returner Josh Smith, a transfer from Colorado. He had to sit out the spring after tearing the PCL in his right knee, but seems to be on track to return for the season opener. He and Carroll could emerge as legit deep threats. The Bruins adopted a “pistol” offense — a variation of Nevada’s — during spring practice, so it will be interesting to see Norm Chow’s unit early on. Sophomores Damien Thigpen and Morrell Presley also have been the talk of the offseason.

TE: I think Notre Dame transfer Joseph Fauria is poised for a big season in Westwood. The Bruins have depth, too, with Cory Harkey and hybrid TE/WR Presley.

USC: Ronald Johnson finished third on the Trojans in receiving yards last season, but I expect his numbers to skyrocket with a year of working with quarterback Matt Barkley and a full season of good health. In addition, the 6-foot, 185-pound senior will see more footballs coming his way with Damian Williams moving on. David Ausberry joins Johnson to form a stellar duo for the Trojans. Ausberry, who played a lot of tight end this spring but will stick exclusively on the outside in the fall, caught two touchdowns in the team’s first intrasquad scrimmage on Sunday. Brice Butler also remains in the mix. But it’s all about the talented crop of youth in Los Angeles. Freshmen Robert Woods and Markeith Ambles are positioned to get plenty of playing time with nice preseason showings, and highly touted Kyle Prater could also join the mix.

TE: Former wide receiver Jordan Cameron switched positions before spring practice. The 6-5, 250-pound redshirt senior caught a team-high eight passes for 96 yards in the opening scrimmage of fall camp. The more experienced Blake Ayles and Rhett Ellison are competing with him for the starting nod, but Cameron gives the Trojans a nice athletic option at tight end. And more performances like the one on Sunday will help him stave off the competition. Incoming freshman Xavier Grimble could also emerge as the season progresses. 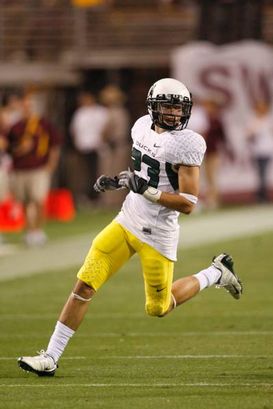 ICONCould Jeff Maehl have an all-conference season for the Ducks?

Oregon: The Ducks’ best receiver is 6-1, 175-pound junior Jeff Maehl, who thrived while catching footballs from Jeremiah Masoli as the ’09 season progressed and could turn in an all-conference season. But Tyrece Gaines and Diante Jackson were both declared academically ineligible and are not expected to return to the team. This sobering news came on the heels of Jamere Holland and Garrett Embry being dismissed from the team. Still, the Ducks return their top three receivers from last year — Maehl, D.J. Davis and Lavasier Tuinei. Davis caught 23 passes for 233 yards and two scores while Tuinei hauled in 24 catches for 217 yards in ’09. If their production increases this season, it could make up for a lack of experienced depth.

TE: Losing Ed Dickson will always weaken a unit, but David Paulson saw a lot of playing time in ’09, and junior-college transfer Brandon Williams impressed the coaching staff this past spring.

Arizona: Juron Criner had a breakout sophomore campaign in ’09. He emerged as quarterback Nick Foles’ go-to receiver, hauling in 45 receptions for 582 yards and a team-leading nine touchdowns — tied for fifth in Wildcat history for single-season receiving scores. The 6-4, 210-pounder continues to become a better route runner, and he’ll be joined by David Roberts and David Douglas to give head coach Mike Stoops a solid batch of playmakers in the passing game to go along wit h a deep backfield in Tucson. Still, Delashaun Dean getting kicked off the team hurts the Wildcats’ depth.

TE: Rob Gronkowski was as talented as they came, but a back injury last season allowed A.J. Simmons to get a year under his belt as the starter.

Stanford: Stanford certainly has talent at wideout for Andrew Luck, one of the best quarterbacks in the nation. Ryan Whalen, the team’s best overall receiver, caught 57 passes for 926 yards and four scores last season. Expect the 6-2, 205-pounder to at least duplicate that productive campaign. While he may lack top-end speed, that’s why junior Chris Owusu is in Palo Alto. He brings the deep-ball threat and has bulked up this offseason. But can he stop dropping passes? Sophomore Jamal-Rashad Patterson could also be primed to take a big step in the Toby Gerhart-less offense. While the Cardinal will still establish the run, this is Luck’s team now — expect the offense to open up as the season progresses.

TE: Jim Dray is gone, but Coby Fleener was Stanford’s top pass-catcher at the position anyway. The Cardinal also has nice depth, led by Konrad Reuland. 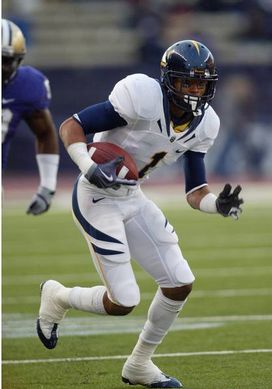 ICONWill Marvin Jones get some help from his fellow wideouts at Cal?

California: In Marvin Jones, the Golden Bears have a solid option for quarterback Kevin Riley, who will get yet another chance to show head coach Jeff Tedford that he is the answer under center. But after the 6-2, 190-pound sophomore, who will emerge? The Bears only lost No. 2 wideout Verran Tucker and unproductive Nyan Boateng, but no one really stepped up last year to complement Jones. Can highly touted freshman Keenan Allen make an immediate impact? The 6-3 former stud safety will likely exclusively play offense in Berkeley this fall.

TE: Anthony Miller earned honorable mention all-conference honors as the Bears’ third-leading receiver in ’09. He will continue to be a top target for Riley, especially if the Bears can’t find a complement to Jones.

Arizona State: While the Sun Devils lost their top two receivers from ’09, it will be interesting to watch the impact that Oregon transfer Aaron Pflugrad has in Tempe. He would have been a starter for the Ducks in ’09 if he stayed in Eugene. Junior-college transfer George Bell, Gerell Robinson, Jamal Miles and Kerry Taylor round out a receiving corps that is unproven but skilled.

TE: The Sun Devils are expected to get the tight ends more involved in the offense this fall, which should help ease the transition to a new signal-caller. Trevor Kohl and Christopher Coyle top the depth chart with Jovon Williams gone and Dan Knapp playing tackle.

Washington State: The Cougars were a disaster offensively last season, averaging just 12 points per game, but there’s hope in Pullman. Top receiver Jared Karstetter returns, giving quarterback Jeff Tuel a solid go-to guy. Karstetter had a team-best 38 catches for 540 yards and six scores in ’09. Gino Simone also returns to a unit that had just four scholarship receivers in spring camp. However, the incoming recruiting class features five receivers, and a couple will get on the field immediately. Which first-year wideout is going to step up and help Tuel move the ball through the air?

TE: This is a camp battle worth watching, as the Cougars list five tight ends on the depth chart. Skylar Stormo and Zach Tatman are the most experienced of the group.